We did it! We rang a handbell peal on the exact 90th anniversary of the first Scottish Association handbell peal, at the same address: 66 Hillhead Street. In 1932 it was the home of Stephen H Wood, a member of the Glasgow band who conducted the peal. These days it's part of the School of Psychology and Neuroscience at Glasgow University, so I was able to use my connections to get permission to ring there. The original peal was Plain Bob Major, but we rang Cambridge Royal. It went smoothly and we were all satisfied. I think I might print a little peal card to give to the occupant of the office. Certainly I'll do one to put up in the bell tower. The picture shows the band in order from left to right. 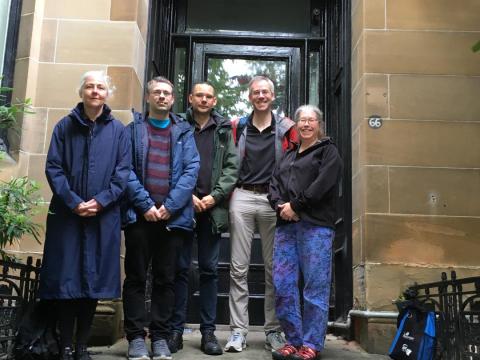