We've done it! We've finished the handbell book, and it's available on Amazon as a printed paperback and as a Kindle edition. The book has its own page within this site. There were some last-minute changes, and formatting the Kindle edition caused a few headaches, but it's finally done.

There's a sample page at the bottom of this article, from the Plain Bob chapter. The real thing is sharper because it hasn't been resized for the blog. The Kindle edition has exactly the same page formatting as the printed edition, so all the diagrams are as they should be. We've tested it in a previewer and on a small iPad, and it looks good. According to the website it's available for Kindle Fire devices and in the Kindle app on tablets - it seems that you can't put it on a black-and-white Kindle.

Now that the coronavirus situation is encouraging more people into handbell ringing, maybe they will want to keep it up, and the book should be just what they need to progress beyond Plain Bob Minimus when they are allowed to get more ringers together.

Meanwhile, the lockdown is giving us much more time to work on Volume 2, which we hope won't take another 7 years to complete.

Advertised in a recent Ringing World, with an online advert here which links to my blog article from 2018 about ringing a peal on the bells.

There's no tower bell ringing at the moment, and handbell ringing is almost entirely limited to people who have a band living in the same house (apart from some experiments with remote online ringing). The Pipes have rung a peal of Stedman Triples, and the Perrinses have rung one of spliced surprise major, but most of the performances on BellBoard these days are minimus.

What can you ring on four? There are 11 plain minimus methods whose plain course is an extent of 24 changes. Instead of showing lines, I will give links to CompLib. The methods are Plain Bob, Reverse Bob, Double Bob, Canterbury, Reverse Canterbury, Double Canterbury, St Nicholas, Reverse St Nicholas, Single Court, Reverse Court and Double Court. (I'm not absolutely sure of my ground here, but I seem to remember that 11 is the magic number).

A surprising number of minimus methods have been rung and named, but I will focus on some traditional well-known four-bell versions of standard methods.

Kent Treble Bob and Oxford Treble Bob each have a plain course of 48 changes, which contains every change twice. The methods are recognisable from their familiar structure, and Oxford turns out to be a double method.

Another old favourite is Bristol Minimus, which now seems to be called Demi-Bristol Alliance. This is based on three bobbed leads of Bristol Major, in which 2, 3 and 4 all stay in the front 4 places. The treble, after dodging 3-4 up, takes the place of 5th place bell on the front, until the half lead; after that it takes the place of 6th place bell. The plain course is 96 changes but it doesn't contain every change 4 times, because the treble doesn't ring the same number of times in each place. An unnamed method with a similar structure extended to have double symmetry is this one. The plain course is 144 changes, containing each change 6 times.

Some other surprise major methods can be treated in this way. Here's one based on Rutland, in which the treble takes over the work of 7th place bell. 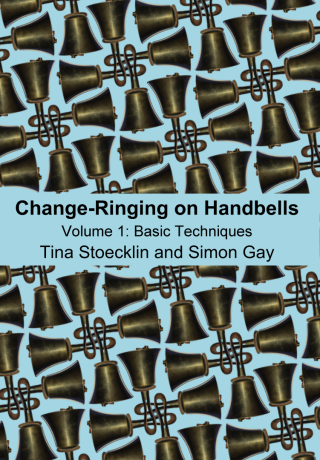 For quite a long time now, Tina and I have been working on a book about handbell ringing. I had been planning to keep quiet until it was actually published, but we received a printed proof copy today and we were so excited that Tina posted it on Facebook, so the cat's out of the bag.

I think we started in about 2013, so it really has been a long time. There have been periods of intensive writing, and periods of many months with no progress at all. But since Christmas it has felt very close to completion, and during the last week we have taken advantage of the coronavirus lockdown to give it a final push.

We're publishing it with Amazon, so it will be available to order using a print-on-demand service. We are also planning to do an e-book edition. The price will be £20 in the UK, and corresponding prices in other markets.

One thing we need to work on after checking the first printed proof copy is the cover. We're happy with the basic design, but the image needs to be sharper, and we're making the colour a little paler. But the interior looks beautiful.

The book is subtitled "Volume 1: Basic Techniques". It goes up to treble bob major, with a chapter on Double Norwich at the end in order to discuss different ways of learning more complicated methods. There will be a Volume 2, dealing with surprise methods, ringing on higher numbers, and Grandsire and Stedman (which are not in Volume 1). We hope it won't take another 7 years to finish Volume 2. Actually, the lockdown should give us an opportunity to make faster progress. We have a lot of draft text already, some of which might be recognisable to readers of the blog, and I've already done all the coding necessary to produce the diagrams.

So, look out for the announcement that the book is available from Amazon, and if the blog still has any readers, we hope that some of you will buy the book!

Tower bell ringing is not possible at the moment in the UK and US because of coronavirus. People still seem to be ringing in Australia and New Zealand. Even handbell ringing depends on having a whole band living in the same house. People have been speculating about using videoconferencing systems for remote handbell ringing. Is this possible?

Back in 2013 there was a handbell peal on a video link between Derby and Edinburgh. Tina and I were invited to ring in it, but it took place while we were away on our summer holiday, so we had to decline. That peal used a special high-performance video link between two universities, and I think it was facilitated by a research project on high-speed networking. But is it possible with the kind of standard videoconferencing that many of us are using increasingly at work, especially with the current travel restrictions?

Dorothy and I have just done a little experiment between two rooms in the house, using Zoom. The results were not good. One problem, which is really a show-stopper in itself, is that there was a significant delay over the network, making it impossible to maintain a rhythm. Each of us was ringing our bells as soon as we saw/heard the other person's bells ring, but each of us experienced a long delay (maybe up to a second) between ringing our bells and hearing the other person's bells. The other problem is that after the first strike of each bell, there was a large decrease in the volume, perhaps because the software was trying to reduce feedback. Even when we both used headsets, the same thing happened.

So, we have recorded our Plain Hunt Minimus on BellBoard for posterity, but videoconferencing isn't going to be a substitute for getting together.

Even if there were no delays over the network, another potential problem would be having bells at each end with compatible tuning. In the past, when trying to make rings of 14 or 16 by combining more than one set of bells, I have found that it's possible for two bells from different sets to be marked with the same note but be a semitone apart in their actual pitch. I expect this wouldn't be a problem with two sets from the same founder.