I've said before that one of the benefits of online ringing with the Five O'Clock Club has been picking up some new compositions, especially using non-standard calls. Today I learnt new compositions of Kent Royal and Maximus.

The original plan was to ring a quarter of Kent Maximus. We've rung a few before, several of which I've called, with the composition M W H repeated. This time Peter suggested a different calling: M B 2H repeated, where the Before is an 8th place bob. It gives a bit more coursing for 3-4 and 5-6. Unfortunately we fell apart in the lead before the Before, triggered I think by some internet lag which led to some too-fast leading and then most of us lost track of where the change was starting.

Simon Rudd didn't have time to start again - he seems to ring two or three online quarters on a typical Thursday. So the rest of us rang a quarter of Kent Royal, which Peter called with the composition H B M W M H. The Before is a 6th place bob. This is very nice because it gives 1280, instead of my go-to calling of W 2H three times for 1440. There is also a good amount of coursing for 3-4 and 5-6. We rang well with a good pace, although afterwards Jeff said that it sounded choppy from where he was. The 1280 might also be worth considering for Littleport, if and when we ring it again.

This afternoon we rang Jessica's first handbell quarter: Plain Bob Minor with her on the trebles. We had an attempt a few weeks ago, which was going well but we had to stop when we realised we had miscalculated the time available before needing to drop our son Thomas off...

In the campaign of trying to understand the structure of methods by thinking of them as compositions, let's move on to treble bob. Now the base method is treble bob hunting instead of plain hunting, and again we will consider variations with respect to pure treble bob hunting as if...

So, am I ringing by Place Notation?

Only partly.    It certainly isn’t the whole story.   I am starting to find it hard to describe what I am doing and now understand why others have said the same.  What I am doing is blending existing knowledge with new knowledge and skills.  The elements I can identify... 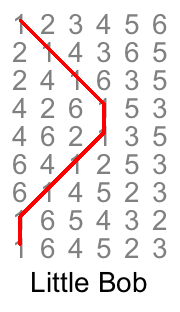 St Clement's College Bob Minor, to use its full title, is another method with a simple structure that we can understand as a composition. 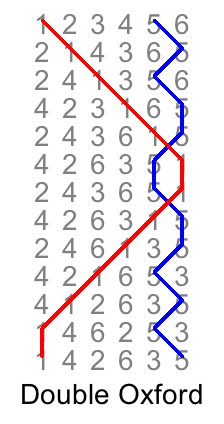 The methods I looked at in the previous article had 6th place lead ends, so what about 2nd place methods? The simplest is Plain Bob. As before, the coursing order during the lead is 124653. At the lead end the 3rd makes 2nds, which jumps it over all the bells...

I have been thinking about how to understand the internal structure of methods by viewing  them as compositions. This isn't particularly related to handbells, except that some of the methods I'm going to look at are methods with simple structures that make them easy for handbell ringing.

Maximum Yorkshire and a bit of Bob Minor

It's been an intensive Yorkshire-fest in the last few days. On Thursday we rang a quarter of royal, which Tina called as practice for her upcoming peal of Yorkshire Major. One thing that tripped us up a couple of times was thinking that everyone above 2nd place dodges when the...

As our target was Surprise Minor, we initially looked at a method we didn’t know at all,  but then decided to switch to Cambridge. To start with the conductor called every place notation.   Even with this aid, we frequently collapsed with errors but gradually rang further. As we got...

What is the simplest peal composition of Yorkshire?

This question came up at home this week because Tina is organising a peal of Yorkshire, which will be her first handbell peal as conductor. What she's looking for is a straightforward composition to call, perhaps with handbell-friendly features.

A straightforward and well-known composition is Pitstow's: