On Monday we tried a quarter of York Maximus, with a band that didn't include a star conductor - so I ended up calling it. It was a little more difficult than we expected, and we didn't score. Also we didn't manage to ring a plain course afterwards. Oh well, we're going for it again next week.

The method has a simple regular structure, as you can see from the diagram. It's an extension of York Minor, but unlike minor it isn't Cambridge above the treble. Instead there are double dodges in 5-6 and above when the treble is in 2-3 and 3-4, with treble bob hunting for the rest of the backwork. In most place bells, a visit to the front consists of making 4ths on the way in and out, with 3rds and back in between. There are exceptions when the treble is near the front, and these are what caused a few problems, especially towards the end of the lead. The key points are that 7th and 5th place bells go to the front in the standard way but leave it differently.

I didn't do quite enough studying before the attempt. I was ringing 7-8, and I hadn't realised that there would be part of the course in which instead of meeting in 7-8 for dodges, I would be meeting and crossing in 6-7. This happens between one bell making 2nds at the lead end and the other bell making 2nds, so it's exactly the same as Plain Bob. So I found myself coming together in an unexpected way, which took a moment to get used to. Next time I will be prepared.

Finding a composition was also a little challenge. For surprise maximus it's always a question of getting a sensible length. Ringing three full courses is a simple option, but at 1584 it's rather long. York has Plain Bob place bell order, so the idea of two and a half courses, up to the wrong, which would be standard for Cambridge, doesn't work. I started thinking about using a big bob, i.e. an 8th place bob which has the effect of a before when called to make the tenor run out. This is a device that's sometimes used in peals to adjust the length, for example to get 5040 in methods with Cambridge place bell order. For York, calling a big before adds a lead, and the idea would be to ring two courses with an extra five or six leads to give 1296 or 1344. I realised that three befores and home, repeated, my favourite calling for Glasgow, would work, so that's what I called. Or would have done if we had got past the first bob. Better luck next time!

York is a good method on any number of bells for getting to grips with wrong-place ringing. It develops the skill of wrong hunting on the front with one bell while the other bell continues its treble bob work at the back. The 3rds place made from the front is a useful landmark as it coincides with a hunting step in the backwork. The best way to start the double dodges at the right time is to pay attention to the position of the treble, which is a good exercise in structural ringing.

We rang a quarter of York Major with the band of Simons, although I didn't write about it at the time. We are also using it as an introductory wrong-place surprise major method in Volume 2 of Change-Ringing on Handbells.

We've got a whole new year stretching ahead of us, ready to be filled with handbell projects. Here are some that come to mind.

As well as losing a peal in Glasgow yesterday, Nick and James scored one in Edinburgh today.

A busy day of handbell ringing

Yesterday we had one of our mad days of trying to combine too many things. The trigger was Nick being available for another Bristol Royal session, so we took advantage of that to also get James to come and call a peal of Pitman's 4 (London, Bristol, Cambridge, Superlative). At some...

Handbell day, with some old friends

Yesterday was the Scottish Handbell Day. Jonathan and Angela were away, but we were reinforced by a visit from Ruth, Richard and Lesley, who we used to do a lot of ringing with before moving to Glasgow. We had the usual mixture of practice sessions and quarters, and everyone made...

On Monday we were joined by Nick for another Bristol Royal session, without the distraction of ringing London first. We agreed that we would set out for a plain course, and if we got to the end, I would call a wrong and keep going for a quarter.

The next method of the month is Ytterbium. Let's have a look at it now, although I don't think we'll be able to ring it until a bit later in August. 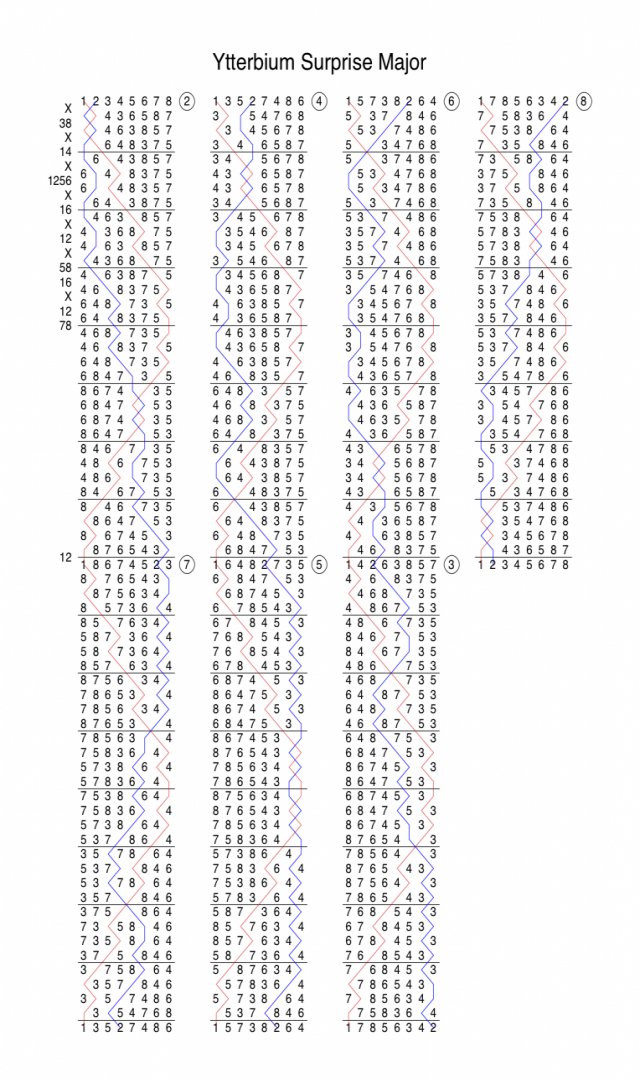 Continuing with the monthly methods from the Ringing World Diary, we rang a quarter of Frodsham on 1st July. I have to say that the method isn't very far up our favourites list. It's Bristol above the treble - even more than that, it's completely Bristol until the treble gets...

We had planned a session with Nick today, as he was going to be passing through central Scotland. It could have been a Cambridge Maximus session, but we didn't manage to find a sixth person, so we decided to work on London and Bristol Royal. We were fairly confident that...

We rang our quarter of Jovium without difficulty. The method was quite straightforward once we got into it - and the amount of wrong-place work is tiny, just a couple of blows of wrong hunting between the fishtails.

A couple of hours before we started, I finally got around to writing...

More Turramurra, and on to Jovium

This week we rang another quarter of Turramurra, so that Tina could ring it and Angela could ring inside. Jonathan called it again, but with a different composition. It went well, and the next day we rang a course of it in the tower.

June's method is Jovium, so...