A band of Simons

Several of the Five o'Clock Club quarters have involved myself, Simon Rudd and Simon Humphrey. We speculated about the appropriate collective noun (possibly an "excellence") and then thought of trying to ring a Simons quarter. Simon Linford was the obvious fourth person, as he has been doing a lot in Ringing Room, and we managed to organise it for this week. We decided to ring surprise major, and settled on a new method so that we could name it. There are already Simon Delight Minor and Simon Surprise Minor, but they have 5ths place made from the back and don't extend in an appealing way because the extensions tend to have 7ths from the back. As it happens, Gareth Davies had proposed some new surprise major methods to be rung with seasonal names, so we used the 8ths place lead end variation of his suggestion for New Year's Day and called it Simons (note the final "s"). Here it is. 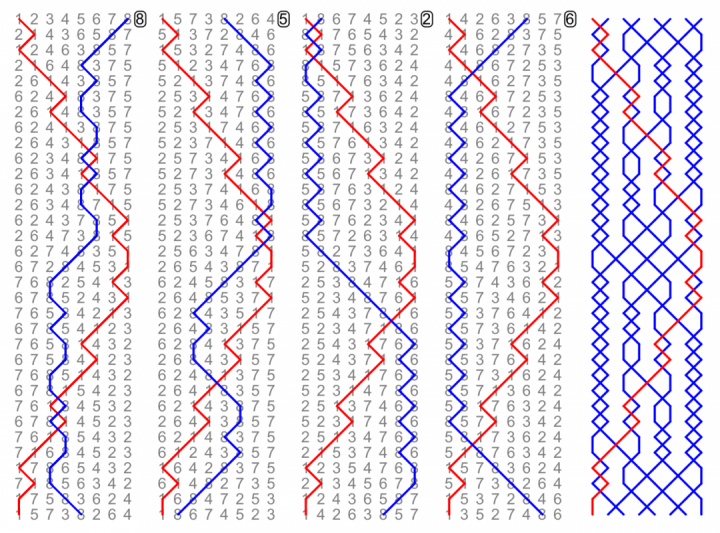 It's not bad - Lessness above the treble, apart from the plain hunt lead end, and lots of long blocks of work. I didn't think there were any reasonable right-place surprise major methods left. We decided to ring it with 6th place bobs and the standard calling of in, out, in three times. I called it from 5-6 so that the 6th would be an observation bell. The calling positions for the 6th are out and 5ths. I noticed a useful mnemonic, that the lead before the calling positions, the 6th is 7th or 8th place bell. So the more familiar "wrong home wrong" helped me to remember when the bobs were coming up.

I must confess that it took us three attempts to ring it. The first attempt was on Sunday, late morning, but we found the internet a bit slow so we switched to 7am for subsequent attempts. Today's success had generally good ringing, with just a couple of rough leads.

The long blocks of work - 4-pull dodges at the back, 5-pull dodges on the front, 3-4 places and 5-6 places - are quite stable once you get into them. Ideally one should use the position of the treble to work out when to stop the long dodging, but I also found it useful to note that the dodges on the front and back overlap by three dodges. As well as the long pieces of work, the method has some fast-moving sections which caught us out occasionally - for example, the second half of 5th place bell.

After putting our quarter on BellBoard, we saw that David Pipe, Philip Earis, David Brown and Julian Howes had got up even earlier and rung Norman Smith's 23-spliced for the first handbell peal of major on Ringing Room. Well done to them!