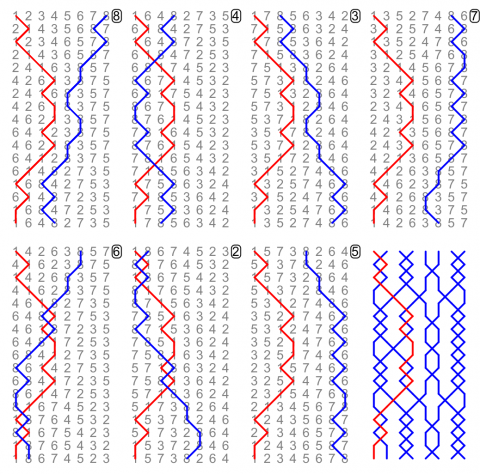 For the Five O'Clock Club today it seemed that we had a band for treble bob royal, but there was a question of whether we could try something other than Kent or Oxford. I suggested Albion Little Treble Bob, which is a treble version of Little Bob. At a late stage we discovered that we were down to an eight-bell band, so we decided to stick with Albion and ring major instead. The line is on the right. It's like Little Bob but with triple dodges across the lead end and half lead, and then double Kent places in 5-6 to avoid repetition.

We found it quite awkward to ring. The 5-6 places are a little tricky, and very often after completing one set you have to immediately do another set with the other bell. Somehow I found that the 2nds place lead end interfered with moving from one dodging position to the next, even though there is uniformly a triple dodge in each position.

Another factor was the composition. My idea was to call W sW W sW H three times, which is a standard 720 of Bob Minor, but it's false. This arrangement by Samuel Austin fixes it:

Very neat, but as the singles at Middle keep changing the observation bell between the 5th and the 6th, that was another thing to think about and not entirely welcome.

After several attempts we rang the first part and then fired out just after the bob at Home. We've agreed that we want to try again, which we hope will be more successful now we've got the initial practising out of the way.