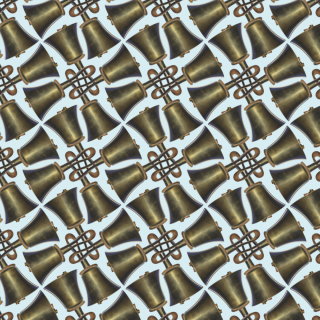 There have been some posts on Facebook recently about ringing-themed designs for fabric, ordered from www.printmepretty.co.uk. You can upload a basic square design and get it printed onto fabric, repeated in a checkerboard pattern (or a few variations).

I decided it would be fun to try this with the bell-cross design from the cover of Change-Ringing on Handbells. Dorothy has been getting interested in sewing, and one of her friends has been making face masks, so there are all sorts of possibilities. You can even order tea-towels.

On the right is the bell-cross pattern rotated slightly with respect to the way it appears on the book cover.

In the slightly rotated form on the book cover, it was not completely obvious whether it could be produced by repeating a basic square. It's probably a bit clearer now. While investigating, I remembered about the 17 wallpaper patterns: these are the different symmetries that a repeating pattern in the plane can have. They are classified by group theory, the branch of mathematics that also underlies the theory of permutations and therefore of change-ringing. 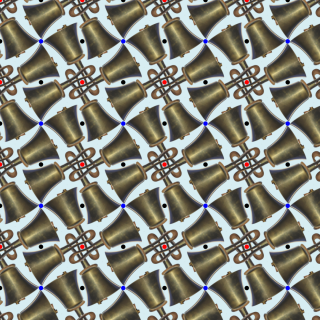 To generate the pattern by tiling a basic square, you can use either four red points or four blue points as the corners of the square. I did it with the red points to get this square: 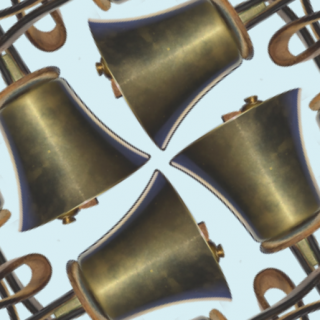 I've ordered sample pieces of fabric with the design at two different sizes. Let's see how they come out.