A while ago I offered to make a set of mini-bells for Angela, partly because she doesn't have a full-size set, and partly to see how long it would take now that I know what I'm doing. I ordered all the parts, put them away neatly in a box, and left them for several months...I didn't feel I could spend time on a mini-bell project until I had painted the downstairs toilet and put up the curtains in the sitting room. 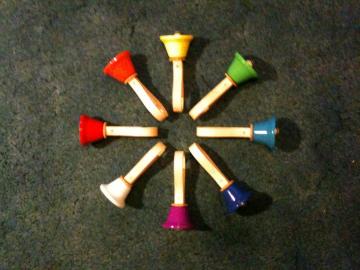 Angela waited patiently, and a few weeks ago I managed to finish the household projects. So one Sunday morning I got up and decided to work on the mini-bells, thinking that it would take a couple of hours and I would be finished by lunchtime. Of course it took longer, closer to six hours, but everything went smoothly and we tried them out on the Monday when Jonathan and Angela came over for a quarter (we rang Yorkshire with Angela on an inside pair for the first time).

In the end Angela left the bells behind so that I could adjust some of the clappers - one or two were quite stiff and difficult to strike. So I've done that and we'll have another try out tomorrow (we're going for a quarter of Glasgow, but that's another story).

This set seems to be from a different manufacturer than the first set. The bells are all different colours, whereas the first set has two red bells. Also, the clappers were attached in a different way, which made it a little more awkward to get them out. So there were a couple of little surprises, but I think the result is good. We still haven't rung a quarter on the original mini-bells, but maybe we'll try one on Angela's bells first.