In 2011 we rang a peal for the 80th anniversary of the first peal by the Glasgow band, which was Plain Bob Major on handbells. At that time in 1931 I don't think the band was up to ringing a tower bell peal. The peal pre-dates the formation of the Scottish Association in April 1932, and the first handbell peal for the SACR was rung in 1932 by the same band. 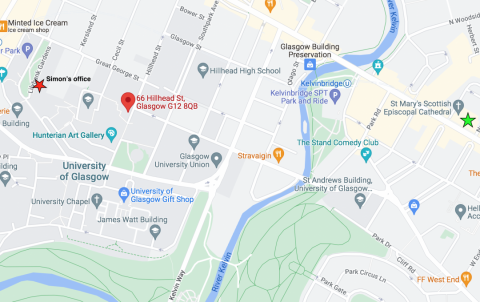 Both peals were rung at 66 Hillhead Street, which was the home of one of the ringers, Stephen Wood, who conducted the peals. The address is part of a traditional Glasgow sandstone tenement block, but it's now one of a number of such blocks that have been taken over by Glasgow University (that one is occupied by the School of Psychology). Back in 2011 I had a vague idea of trying to ring a peal at the same address at some point in the future, and now that the 90th anniversary of the first SACR handbell peal is coming up (12th June), I got around to asking and have obtained permission to ring there. The fact that I work at the university made it fairly easy, and as it happens the exact date is a Sunday, so as long as we can get someone to let us in, we won't be disturbing anyone. I'm going for a visit tomorrow to make sure there's a suitable room to ring in. Just for interest, the map shows 66 Hillhead Street as well as my office (red star) and the bell tower (green star).

All five of our regular band are keen to ring, so we won't be repeating Plain Bob Major this time. I think probably we'll ring Cambridge Royal, as we have a good success rate with it.

What I didn't realise until recently is that between the first peal by the Glasgow band and the first handbell peal for the SACR there were six more handbell peals credited to the St Mary's Cathedral Society. They were all Plain Bob Major, except for one of Grandsire Triples. One peal was rung in the ringing chamber at the cathedral, one other was at 66 Hillhead Street, and the others were at three other addresses nearby.

Simon Aves drew my attention to these early handbell peals by the Glasgow band. He looked into them while researching his book on the history of ringing in Scotland, which was featured recently on the Fun With Bells podcast. Stephen Wood left Scotland after 1932, and there weren't any more handbell peals in Glasgow. The second and third SACR handbell peals were in 1936, at a house called Dun a'Bhuilg in Kilmory Knap, Argyll. Spurred on by my success in getting 66 Hillhead Street for a peal, I looked into that address. It's a house that was built for Edwin Lewis as a holiday home and is a notable example of the Arts and Crafts style, designed by Archibald Powys. Edwin Lewis was a significant figure in 20th century ringing - he was master of the College Youths in 1936/37 and was president of the Central Council from 1930 to 1957. It turns out that the house is now owned by Edwin Lewis' grandson who runs it commercially as a holiday cottage, so I am thinking about organising a handbell peal week there one summer. In any case I am in contact with the owner and we should be able to go and ring there during the off season. It's not far from Inveraray so there is potential to combine a visit with other ringing.

The fourth SACR handbell peal was in 1946 at an army camp in India. To be precise, No. 4 Meiktila Camp in Kalyan Bombay Province. The band consisted of three Captains: Albert Sargent (imagine the jokes...) who was a member of the Glasgow band and rang in most of the 1931/32 peals except for the first one; Wilfrid Moreton who is famous as the founder and long-time organiser of the Hereford Ringing Course; and John Banks, who according to PealBase only rang two peals, both on handbells at the same army camp. The other peal was by the same band but rung for the Hereford Diocesan Guild. One peal was Plain Bob Minor and the other, remarkably, was in three doubles methods including Stedman, rung in 2h10 on a size 15 set. That's really going.

After that there's nothing until 1978, when a band in Edinburgh started ringing handbell peals. A key member of that band was Steve Mitchell, who Tina and I did a lot of handbell ringing with when we lived in London. In fact he was instrumental in our move to Glasgow, because he invited us on a few ringing/walking holidays in the highlands in the late 1990s and that's where we got the idea that Scotland might be a good place to live.