We didn't get the quarter of Bristol on Monday. I got a bit lost in a way that would have been easily recoverable in live ringing, but proved impossible to retrieve with the constraints of online ringing. It was a good attempt though, with accurate ringing up until the big kerfuffle.

After writing about two variations on the same compositional idea, I noticed a third variation, which I then unfortunately called by accident even though it's the least musical of the three. Further thought revealed several more variations.

The diagram below shows coursing orders and the transitions between them by bobs in various positions. The bobs shown are the ones that keep 3-4 out of the 5-6 position and keep 5-6 out of the 3-4 position. 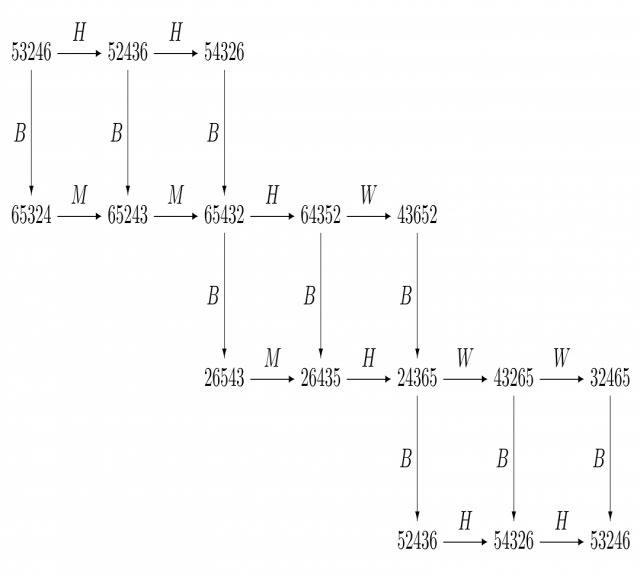 Closer examination reveals that not all of these 27 callings are of interest as quarter peals. Callings that start and finish with bobs Home are false if the total number of homes is more than 2. There are 9 of these false callings.

Some of the callings are shorter than a quarter. To get a quarter peal length (it will be 1312), we need 5 courses, and then there will be 6 extra leads from bobs at M, W or H. Note that to get from 53246 to 53246 in the diagram, we have to use 6 such bobs (the horizontal arrows). A full course comes from either following a B arrow, or calling M H or H W (because there is a full course between the two calling positions). However, it is possible to get from 53246 to 53246 with only 4 full courses, and there are 4 ways of doing this.

The remaining 14 callings give 1312. The table below summarises all 27 callings, with notes on the ones that are already in Composition Library.