Getting started with Surprise Minor

There has been some discussion this week on the change-ringers email list about ways of thinking about methods for handbells, and in particular the role of place notation. I have taken this as a prompt to try out some thoughts about how to get started on ringing Surprise Minor, because the transition from simple rule-based methods such as Plain Bob, Little Bob and Kent to more complex surprise methods, naturally raises the question of which approach to take. Ultimately, however, I'm afraid that there isn't a magic formula. whichever way you think about it, you just have to try it and keep going until it starts to make sense.

The features that all Surprise Minor methods have in common are the following.

The second and third features are what distinguish surprise methods from treble bob or delight methods. One consequence of them is that while ringing surprise on handbells, it is common for one bell to dodge while the other bell hunts or makes a place.

There are thousands of possible Surprise Minor methods, but historically, ringers’ attention has often focused on a much smaller set, identified by a further list of desirable features (of course, it’s all a matter of taste). These features are:

Applying these conditions brings the number of possible methods down to 41, which are often known as the “standard 41”. A consequence of these features is that in all 41 methods, the block of place notation 14x12x36 occurs as the treble moves from 2nds place through the 3-4 dodge to 5ths place. The treble dodges in 3-4 as 2nds place is made.

A useful way to think about surprise minor methods is to separate the work above and below the treble. Look at the grid of a method, with the treble’s path drawn in a different colour; the work is separated into two regions, above the treble (i.e. closer to the back of the change) and below the treble (i.e. closer to the front of the change). The work above the treble is also known as the backwork, and the work below the treble is also known as the frontwork. Within the standard 41, it turns out that there are only 4 different backworks (or 7 if you count the difference between 2nds and 6ths place at the lead end). Also several of the frontworks occur in more than one method.

In principle, any of these frontworks could be combined with any of the 7 backworks (two versions of each backwork, except London) to give a total of 42 methods. In practice, there are various ways in which some of these combinations might be undesirable:

Among the standard 41, there are 15 methods with these frontworks. If we restrict attention to the right-place backworks (Cambridge and Norwich) then there are ten methods: Cambridge, Ipswich, Norfolk, Primrose, Bourne, Hull, Norwich, Westminster, Annable’s London and Netherseale. 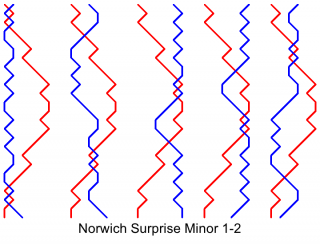 I will describe two ways of starting to ring Norwich; two ways of thinking about the method. In either case, there are some tips that apply to practising anything difficult. 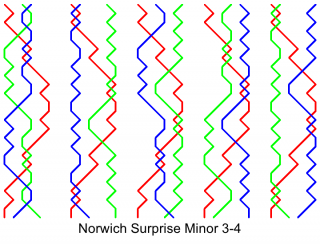 Ringing by the blue lines

First you need to know the line, just as you would for ringing the method in the tower. You should also know the treble-passing positions and the positions of the dodges with the treble. Choose a pair: 1-2, 3-4 or 5-6, and study the diagram for each lead, noting how your bells work together and how the work fits in with the treble. Then try to ring it. If it doesn’t work, try the same lead again. 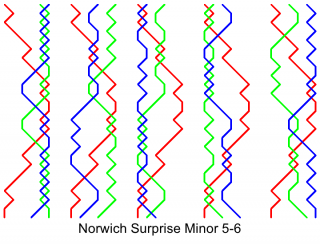 Ringing by the structure

Try ringing each lead separately and then put it all together. It might be helpful for the ringer of 1-2 to announce what the treble is doing. You might find yourself thinking explicitly in terms of the place notation, but you should only think about the place notation at backstroke, because the handstroke is always X.

Just as with Norwich, you can try ringing it by the blue lines or by the structure. The general instructions are exactly the same; the only difference is in the details of the lines and structure.

Branching out: variations of Cambridge

By changing the lead end and half lead, we can obtain 3 variations of Cambridge. Ringing 16 at the lead end produces Primrose. Ringing 16 at the half lead produces Ipswich. Doing both produces Norfolk. Together with Cambridge, these methods are known as the Cambridge Four (who are innocent, of course). With a sound knowledge of Cambridge, including where the half leads occur, it should be possible to ring all four; it’s a question of remembering to concentrate when the half lead or lead end is coming up. Norfolk seems to be the trickiest, because it has the variation at both points.

There are two more right-place, Cambridge-above methods in the standard 41. They are Bourne and Hull. The place notation when the treble is in 5-6 is x34x, and the half lead is 36. Bourne has 2nds place at the lead end and Hull has 6ths place. Adding these methods to the Cambridge Four gives the Cambridge Six, for which there is a classic 720 of spliced: C-NIHCC-NPBI- three times.