Yesterday was the Scottish Handbell Day. Jonathan and Angela were away, but we were reinforced by a visit from Ruth, Richard and Lesley, who we used to do a lot of ringing with before moving to Glasgow. We had the usual mixture of practice sessions and quarters, and everyone made good progress. There were two quarters of Yorkshire Major, one of Cambridge Major, and a couple of attempts at Plain Bob Minor that didn't quite go.

I wanted to ring something with Nick, Ruth, Richard and Lesley, as a reunion from the days of ringing with Roger Bailey at Imperial College. My idea was to ring a short touch, then someone suggested a quarter, then Nick suggested spliced Cambridge, Yorkshire and Lincolnshire. So that's what we rang - Richard is very good at quickly learning compositions.

Rung at the Scottish Handbell Day by former members of the Imperial College handbell band, remembering Roger Bailey. Spot the connection behind the band in the photo. 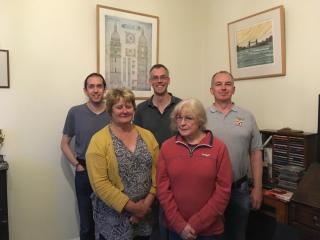