Today should have been the Scottish Handbell Day, but like so many other things, it can't go ahead. However, yesterday I tried out Graham John's Handbell Stadium, both for solo practice and online ringing with other people.

Handbell Stadium works with little motion controllers that plug into USB ports. They allow a realistic up/down action for simulated handbell ringing. Some people have been attaching them to handbells, with the clappers tied or removed, to give some extra weight and improve the feel, but I just used them as they are.

The 3D version of Handbell Stadium gives a much more realistic experience than ringing with Abel. There is a choice of room decor to ring in - these pictures show the "basement" - and you can choose either disembodied bells or the "men in black". 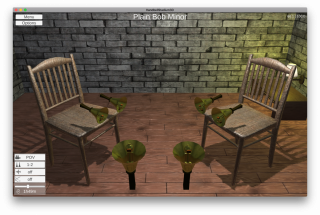 I have done so much practising with Abel / Mabel, when I don't look at the screen, that it took me a while to get used to watching the simulated bells. It certainly is possible to look at what they are doing, especially the treble as I normally do while ringing. I think it's a big step forward for simulated handbell practice.

Handbell Stadium also offers online mode, where you can ring with other people over the internet. Graham invited me to try a quarter with him and Gareth Davies and Lesley Boyle. We logged in to Discord, which is a text/audio/video messaging system much used by online gamers ("I didn't know old people used Discord", said my son Thomas) and went into a room in Handbell Stadium. The idea was to ring a new surprise major method for VE day. The method was reasonable, right-place, Cray above the treble with an 8ths place lead end - I won't reveal exactly what it is, in case Graham wants to keep it for another time. We found the ringing difficult because of the internet lag. It seemed that my lag was worse than the others'. Possibly connecting to my router with a cable instead of wifi would have helped, but I have left the necessary adapters in my office. Maybe we need to upgrade the router. I think we were ringing the method OK, but there were times when it became impossible to maintain a rhythm and it seemed as if everyone was ringing at once. We had two attempts of about a course and a half each, then gave up and rang a course of Yorkshire, which we found a little easier.

Later in the evening I joined one of the open practices that Graham has been organising. Everyone gathered on Discord and then Graham put us into groups in separate rooms. I was with three other people and we tried some Bob Major, but one of the others became disconnected and wasn't able to join in again. The remaining three of us rang Bob Minor and Kent successfully. I found it easier with fewer bells, because we were able to go at a slower pace without grinding to a halt. Then one of the three had to leave, and Graham gathered the other two of us into a group of six, which managed to ring some plain hunting on 12. Apparently it was the first 12-bell ringing on Handbell Stadium.

I'm really impressed that Graham and others have produced workable software for online ringing, so quickly. I haven't tried Muster (which connects up several instances of Abel) or Ringing Room (which has become fairly popular). I think it's worth persevering with online ringing, to see whether it can get close to the real thing if everyone has fast enough internet. I would like to try it again. But in any case, Handbell Stadium in practice mode is a fantastic development for individual practice and I'm sure it will be refined during the coming weeks.