Handbell ringers in the Huntingdon District of the Ely DA met on Saturday 13th February to attempt eight quarter peals. Most of the ringers are at the Plain Bob Minor stage practising in various groups on a weekly basis and everyone has previously rung at least one quarter peal on handbells. A pre-planned arrangement of ringers according to their preferred pairs worked well and ringing commenced with the sound of bells in adjacent rooms. Although only three quarter peals were successful we all had a very enjoyable morning. A break at half time included coffee and biscuits and the group photograph, and we are grateful to Sally Mew for hosting the event this year. Details can be found at http://bb.ringingworld.co.uk/view.php?id=992480, http://bb.ringingworld.co.uk/view.php?id=992481, and http://bb.ringingworld.co.uk/view.php?id=992482 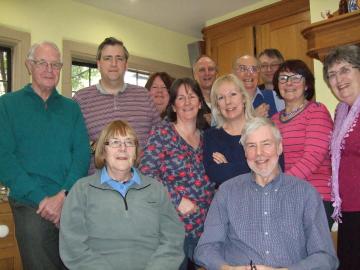 What a lot of activity in just a morning! Thanks for telling us about it.