The Five o'Clock Handbell Club has gone into Christmas mode, with a range of seasonally-named methods on the menu for the next two weeks. I didn't sign up for any initially, but there are two attempts arranged for New Year's Eve Little Surprise Major on, you guessed it, 31st December - and one of them is a person short, so I have dropped in. Then I looked up the method, and here it is (just showing half a course). 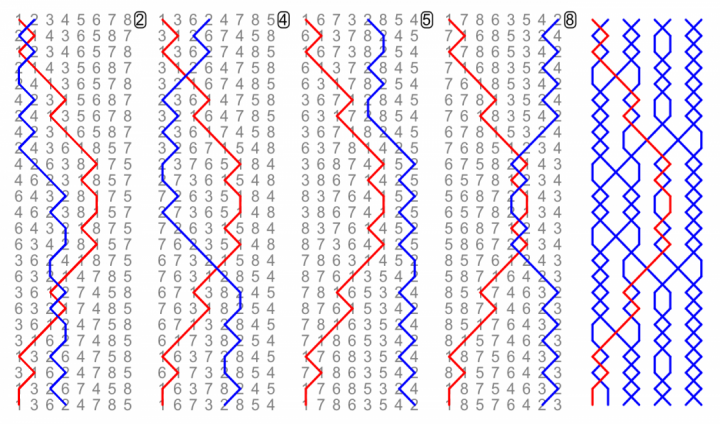 I wasn't sure how to start thinking about compositions, so I used the search facility in CompLib to try to find something suitable. There were no compositions intended for New Year's Eve, but CompLib is able to try all of its compositions on a particular method to see which ones are true. A lot of the compositions that came up were unsuitable lengths, which often happens with CompLib's search because it tries everything regardless of the place bell order or even (as in this case) the length of the lead. The one that looked the most promising was this one, by Claire Nicholson and Elf (Mark Davies' composing software), originally for Nickel Little Surprise Major.

However, for New Year's Eve, the tenors are split - not ideal - and moreover the part end is different, 64352. How strange. Must be something to do with the irregular lead ends. So then I looked to see where bobs can be called that don't affect the tenors. The answer, although we can't see all of it from the diagram above, is that a bob at the first lead affects 6,3,2 (writing them in the order 3rd place, 2nd place, 4th place as they would be without a bob), a bob at the 6th lead affects 2,4,5 and a bob at the 7th lead affects (of course) 3,2,4.

With this in mind, I came up with the following calling for 8 courses, which I don't suppose is original. It's just the most obvious way of swapping 5 and 6 to try to get a nice two-part.

Well, that's good, but what about ringing and trying to conduct it? How would I get a grip on what's happening in relation to the coursing order? Here are the "expected" lead ends (i.e. what they would be in Plain Bob) and the actual lead ends.

Now, what about the method? It looks rather like Cornwall, or actually the 2nd place lead end variation of Cornwall, which is called Falmouth. The place notation is exactly the same as Cornwall up to and including the treble's dodge in 5-6, and then the half lead place notation is 56. However, because the lead is 8 changes shorter, the place bells join up in a different way - note that because the frontwork and backwork of Cornwall are both based on treble bob hunting, removing 8 changes is not enough to put all the bells through an extra cycle of work. (Incidentally, that's why Cornwall doesn't work on 10 but does work on 12).

So that's it, and I find that after studying a method enough to write a blog about it, I know it well enough to ring it. Let's see what happens on New Year's Eve.

Unfortunately we didn't get the quarter

We had a good attempt with a much better composition by Simon Humphrey: also a two-part but a simpler calling (H, sV, V, 2H) that gets all the 5678s and 6578s. In the end there were three attempts by different bands, of which one was successful.