As mentioned on the blog previously, I followed Richard Johnston's instructions to convert a set of coloured toy handbells into a decent set of practice bells by fitting them with better clappers and leather handles. Here's what you end up with: 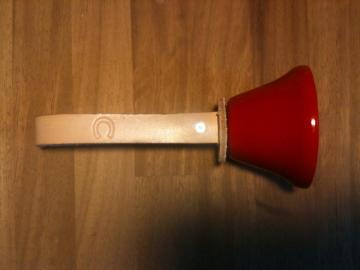 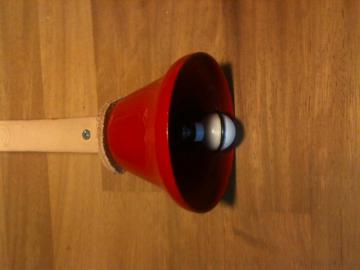 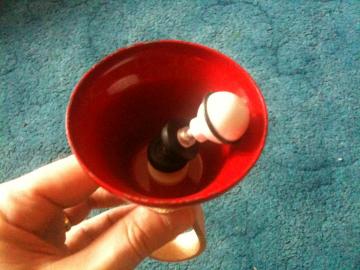 It's amazing how good they sound, considering that the bells are made of pressed steel and are all the same size; the tuning comes from small differences in the profile. You can hear them ringing here.

2. Cut a small groove around the equator of each clapper ball. I did this with a junior hacksaw, which is rather fiddly. If you have a small lathe then that would make it easier. Richard pointed out that you can improvise a lathe by mounting an electric drill in a stand, gripping the clapper ball in the drill chuck, and using a knife or chisel to cut the groove.

3. Fit an O-ring of a suitable size onto the groove around each clapper ball. This is to deaden the sound slightly when the bells are rung. It's worth gluing the O-rings in place, as otherwise they tend to spring off while ringing or handling the bells. 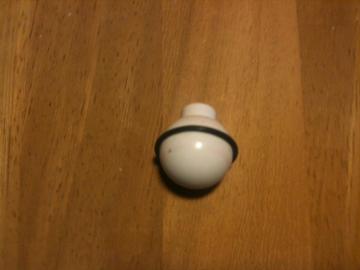 4. Now make the clapper assemblies. This is the first clever part of Richard's design, based on the Robart Super Hinge Point. 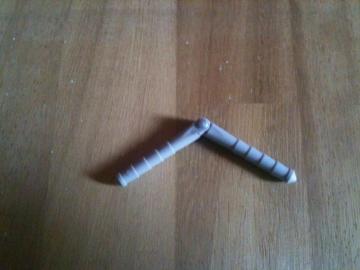 I found that some of the hinges seemed rather stiff, so I used a knife and pliers to deform the rivet until they became looser. Push a tap washer onto one side of the hinge; it should rest against a little corner on the hinge. The washer will be held in place by a length of windscreen washer tube pushed onto the hinge behind it. Onto the other side of the hinge push a small slice of windscreen washer tube, followed by another tap washer, followed by another short length of tube to keep it in place. Before and after adding the second washer, it looks like this: 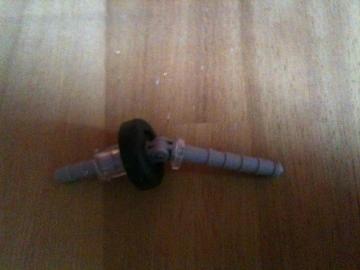 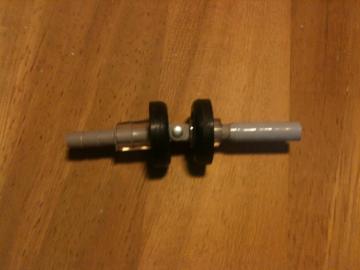 The tap washers are the second clever part of Richard's design. They give just the right amount of spring to let the clapper strike the bell and then bounce off slightly.

One end of the hinge needs to be cut short so that it will fit into the hole in the plastic handle of the bell. Now put the clapper ball onto the hinge above the second tap washer. It might fit snugly, or you might need to wrap some insulating tape around the hinge first. Richard added some weight below the clapper ball, but I didn't find it necessary. The completed clapper looks like this: 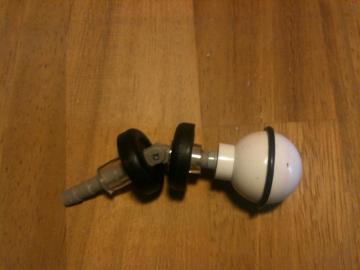 5. Now try pushing the clapper into the hole in the plastic handle. Eventually it will be glued in, but first you need to adjust the lengths of the various sections of windscreen washer tube in order to get the clapper striking the bell in a reasonable place. After a bit of trial and error with the first clapper, it should be straightforward to make the others.

6. It's best to make and fit the handles before gluing the clappers in, because it's easier to align the clapper with the handle than the other way around. To make the caps, use the 1.5 inch leather strip and cut out a circle of the same diameter as the crown of the bell. I marked the circle and then cut it out with a Stanley knife. You also need to drill a hole in the centre of the cap so that it will fit onto the plastic handle of the bell. On my set, a 3/4 inch drill but was about right. It is probably easiest to mark out the circle for the cap, then drill the hole, then cut out the cap. Before pushing each cap onto the handle, I put on an O-ring in order to get a little separation between the bell and the cap. This is not really necessary, but I think it looks nice.

7. To make the handles, cut suitable lengths from the 3/4 inch leather strips. Mine are 25 cm. If you are going to stamp the note names onto the handles, do it before fixing them to the bells. Then hold the leather onto the plastic handle of the bell, and put a screw through the leather and into the plastic. I found it easy to do this without drilling any starter holes. Richard used rivets, which requires drilling a hole in the handle and through the leather, and then using a hand riveting tool to insert the rivet. I tried this but I couldn't get it to work. Richard thinks that I might have been using too short a rivet; also, it was the first time I had tried to use a riveting tool. Anyway, using a screw instead is easy and looks fine. Put in one screw on each side of the handle. If you want to fix the leather more firmly to the plastic handle, you could put in additional screws further up, but I don't think it's necessary. 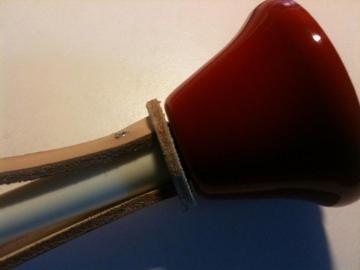 You now have a perfectly ringable, and easily portable, set of handbells for £135.26 (+ delivery charges), which is less than half the cost of one size 15 bell from Whitechapel. If you already have a set of toy bells then the cost comes down to £105.31, and if you don't bother with the letter stamps then it's only £72.52. Even then you have a lot of spare O-rings, washers, screws and leather, so the cost of making a second set would be lower.

I bought a full set of these little bells a few years ago with the idea of converting the clappers. I never got round to it so I was very excited finding your post on the subject. I have been re-invigorated and will set about the conversion as soon as I can get the parts together (actually I can probably find a lot of the items already in my garage). Thanks again for publishing.
Your mini-handbell article took me back to 1970 when my father, Gordon Lucas, used wire clappers with a metal bead as the clapper ball, in a similar toy set of 8. The wires tended to tangle on the eyelet around which they'd been wound, forcing ringers to waggle bells at unexpected times to free the clappers up! Occasional trills enliven Plan Bob Doubles no end! Some friends and I used them at the time to form a school ringing club when I was 11, meeting in the playground before the start of the school day. Our headmaster eventually took pity on us and bought an almost new set of 10 real handbells. We could barely believe our good fortune but without the toys he'd never have understood what the club was doing. The toy bells travelled on some University of Bristol Society cycle trips - after all, they pack fairly easily - and were quarter pealed by members of that society alongside a Bedfordshire canal around 1980. I lost track of the bells sometime after but spotted a set in a Hobgoblin catalogue some 10 years back and bought them. They still sit in their box awaiting conversion to ringability, but now you've reminded me, I might surprise the peal band I'm due to ring with in a fortnight. Your clappers are much finer than ours were but I like the idea of installing Lucas-wire clappers and seeing if the band can manage the clapper waggle trills. Does the CCCBR accept peals in which some of the bells may sound a few hundred times more than the others?
How sturdy are the straps on these? I've got a 'proper' Taylor 12 that are in need of new straps and caps. If I can, I'd like to do it myself to save money! Cheers Alex.
The leather I used is 3mm thick. It's fairly flexible - I don't think it would do for the handle of a real handbell. With the mini-bells it doesn't matter because the original plastic handle is still there for rigidity. I'm sure you could find a source for thicker leather, though, and do a replacement job on real handbells yourself.

Having been inspired by this post, I finally got around to attempting to convert a set (of the smaller / cracker version) of these handbells. (I was intending to write a response detailing my efforts, once they have been used in anger.) Unfortunately, while beta-testing, (and not waiting long enough for the glue to set, I think), the seconds clapper ball flew off. Despite knowing that, logically, it must be on the floor in that corner of the room, grovelling around on my knees in said corner has yet to recover it. Has anyone had a similar experience, or otherwise had to find a replacement clapper ball? Any suggestions? ("Buy another set and use the ball from one of those" is one idea, and probably not a particularly expensive one, but only leaves me with the question of how to make _that_ set back up to a usable eight...)

If you know someone with suitable tools and skills (or maybe you have them yourself), you could try a wooden clapper ball, and then put the rubber O-ring on it as usual.