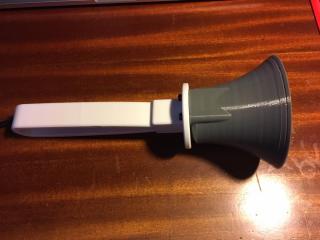 I've just rung another quarter in Ringing Room: Cambridge Major, on handbells of course. I tried out a pair of Ben Johnson handbells that I put together at the weekend. They performed well and they're a comfortable weight. Ben's look more like real bells, with a metallic bronze for the bell and a dark brown handle. I used the colours that I have, so the bell looks more like steel, but the handle can be considered similar to a Malmark bell.

The quarter went pretty well. We were hit by delays about a course from the end, which were quite difficult to ride out. We're all getting better at keeping going and recovering, but in this case the ringing had become fairly quick and we needed to slow down, but it was hard to coordinate our slowing down. I was trying to wait for the treble when it was near the front, but I seemed to be seeing delays on the treble itself, which meant that other bells were getting in first. We survived though, with just a rough lead, and the rest of it was good.

The band was myself, Simon Rudd, Marj Winter and Gareth Davies. Marj was using a pair of homemade handbell controllers with the original large Leonardo board, Simon had a pair of Tim Hart printed bells (they both live in East Anglia), I had my Ben Johnson bells, and it was just Gareth using the original ActionXL controllers. Marj, Gareth and I were all using Macs, with my version of Handbell Manager enabling us to use the controllers in Ringing Room. So everyone was using my technology one way or another, as the Tim Hart bells use my software. That was extremely satisfying.

Now to deal with the title of this article, which is ringing with other conductors and indeed other bands. One thing is that I've rung a couple of quarters in which I was the least experienced member of the band (that doesn't happen very often these days) - an example was on Saturday morning, when I rang one of Bristol Royal (after meeting short for Yorkshire Maximus) with Graham John, Graham and Kath Firman, and Lesley Boyle. Another is that just having someone else conducting, and knowing that there's a limit to how much putting right anyone can do during online ringing (because it's harder without the usual visual cues), is rather relaxing. Finally, it's interesting to see which compositions other conductors choose, and I have picked up a couple of callings that I didn't know.

Today was an example of that. Simon Rudd called this composition:

It's a good handbell composition. 3-4 (which I rang) start with the whole plain course and are then coursing all the way to the end. 5-6 only ring the 5-6 and coursing positions.

While ringing the coursing orders 65432, 43652 and 24365 I noticed something that I haven't spotted before. In methods with Cambridge place bell order, i.e 2 6 7 3 4 8 5, because 3 and 4 are consecutive in the place bell order, the 3 rings what the 4 rang in the previous lead. This is true whenever your pair is in the 3-4 course: one bell follows the other one through the sequence of place bells. This is all very familiar. Now, when there are two handbell pairs both in the coursing position, directly after each other, for example in the coursing order 24365, a further interesting thing happens. Here 4 and 6 are in the 3-4 position, as are 3 and 5. This means that in each lead, 3-4 ring the pair of place bells that 5-6 rang in the previous lead. It's an additional aid to keeping track of what the other pair is doing.

Finally, I think the online ringing is making me a bit calmer as a conductor. Because you usually can't tell the difference between a mistake and a network delay, I am less inclined to try to make a comment the instant I hear something wrong. I hasten to add that in most cases I can't pinpoint who might be wrong, but in live ringing I am very inclined to comment on structural features (dodge above, hunt above, backstroke point, etc) as soon as something goes wrong. Often it's better to wait and let the ringing correct itself. I am noticing that Graham John is an amazingly calm conductor - a good example for anyone to follow.