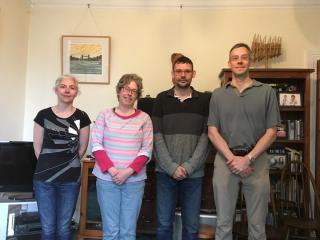 We finally did it - Horton's Four on handbells. The composition was published almost 30 years ago, but is hardly ever rung on handbells: only three times previously.

One of the difficult aspects of the composition as originally published is that the tenors are split for almost the last third of the peal. It is possible to rotate the composition so that the split tenors section is rung first, while the band is still fresh, but we decided to ring it in the original form. Practising the split tenors section as a (long) quarter peal, which we did several times, is helpful.

It was a much longer project for us than for any of the previous bands - about two and half years, on and off, with the main "off" being a detour into ringing 23-spliced. Along the way we've rung 11 quarters and two date touches, as well as several quarters of the individual methods, numerous lost quarters and two or three lost peals. We hope it's improved our ringing in general - we'll see, whenever we next try something different. Overall it was a great team achievement, and extremely satisfying.

It's a good challenge, and obviously there are other bands and conductors who would be able to do it. Give it a try and we'll look forward to seeing more peal reports.