What is the minimum hardware for online ringing?

A while ago, during discussions with the eBells consortium, the following question came up: what are the minimum hardware requirements for online ringing? We know that Ringing Room doesn't really work with tablets or smartphones, so we assume that everyone has a laptop or desktop PC to use, but what if that's not true? What's the minimum you can get away with?

Several years ago the Raspberry Pi was developed as a cheap hobbyist computer board, intended to recreate the spirit of home computing in the 1980s when computers were much less commodified and invited experimentation and learning. The Raspberry Pi has been through many iterations and now has a wide range of products. A recent development is the Raspberry Pi 400, which puts the whole computer inside a keyboard and has a range of connectors including an HDMI output to drive any display or a standard TV. 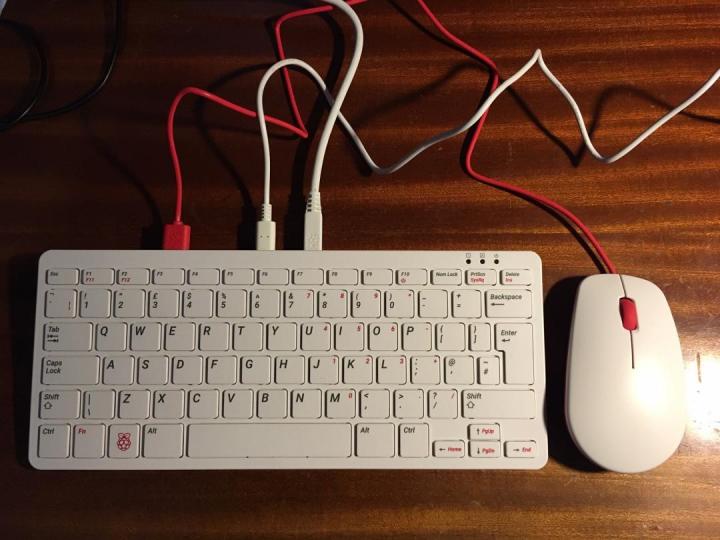 This packaging really is like a 1980s home computer, for example the Sinclair ZX Spectrum that I grew up with. The obligatory historical price and performance comparison is that the Raspberry Pi 400 has approximately 2000 times the processing power and 250,000 times as much memory. Bundled with a mouse and a couple of cables it costs £93.90. My Spectrum cost £125 in 1982, which is £444 in today's money according to an inflation calculator. Anyway, I bought a Raspberry Pi 400 for research purposes, and it arrived yesterday.

It was easy to get it set up, and one of the first things I tried was Ringing Room with my version of Handbell Manager. It works! I haven't tried it in Ringing Room with anyone else yet, but I see no reason why it shouldn't work. You also need Zoom or something equivalent for audio communication. The Raspberry Pi doesn't have a standard headphone/microphone socket, but I have a USB headset, which worked fine. Alternatively, it's possible to buy an adapter that has a standard 3.5mm socket and a USB connector. The Zoom app isn't available for the Pi, but connecting through the browser works. There's no camera (it's possible to add one though) but it's only audio that's really important.

So that's a cost of £93.90 for a system that supports Ringing Room, assuming you already have a TV. Can we make it any cheaper? The simplest and cheapest Raspberry Pi with wifi is called a Zero W, and it costs £9.30. It's a bare electronics board with an HDMI output for a display and a couple of USB sockets. It runs the same operating system, so everything's fine from the software point of view, and it's possible to plug in a keyboard and mouse.

If you want to ring with eBells, the keyboard would only be necessary for logging in to Ringing Room - so instead you can use an on-screen virtual keyboard, similarly to what you do on a phone or tablet, and then all you need is a mouse. But why do you even need a mouse when an eBell detects motion in 3 axes and has a couple of buttons? You don't! I wrote a little bit of software to make an eBell operate as a mouse, and it works - the normal ringing action does the y axis and twisting the bell does the x axis. I admit it's not as easy to use as a standard mouse, but it is usable. So now I've ordered a Raspberry Pi Zero W, and in a future blog I will report on a proper test of ringing with the absolute minimum of hardware.