During the last few weeks, Tina and I have extended our handbell ringing circle to include Caroline, who was put in contact with us by Lesley Belcher (chair of ART). Caroline was confident ringing Plain Bob, so the idea was to progress towards Kent and Oxford and beyond. We worked our way through Little Bob and St Clement's and then moved on to Kent and then Oxford, all in Ringing Room of course. This has gone well and we are now taking the next step.

It's quite timely to have a relative beginner to ring with, because we are hard at work on Volume 2 of Change-Ringing on Handbells. The main theme of Volume 2 is moving from treble bob to surprise methods. There are alternative ways of tackling this step. In the past, Tina and I have usually plunged directly into Cambridge after Kent and Oxford. If the learner is experienced on tower bells and already knows Cambridge thoroughly, then it's feasible to throw them in at the deep end if they have two experts to practise with. I'm sure that approach would also work with Caroline, as she is experienced up to surprise maximus in the tower, but we have decided to try a different route. This is partly because the book is aimed at people whose tower bell ringing is not ahead of their handbell ringing, and even at people who are not tower bell ringers at all.

What we are trying is an approach used by Roger Bailey, who I did a lot of ringing with in the 1990s. Roger taught a lot of people to ring handbells, including some who never learnt tower bells. His next step beyond Kent and Oxford was Woodbine Delight. This is Oxford with the addition of 4ths place as the treble hunts between 2nds and 3rds. Here are the line and grid, although the aim is to ring it by the structure, so studying the line is not so relevant. 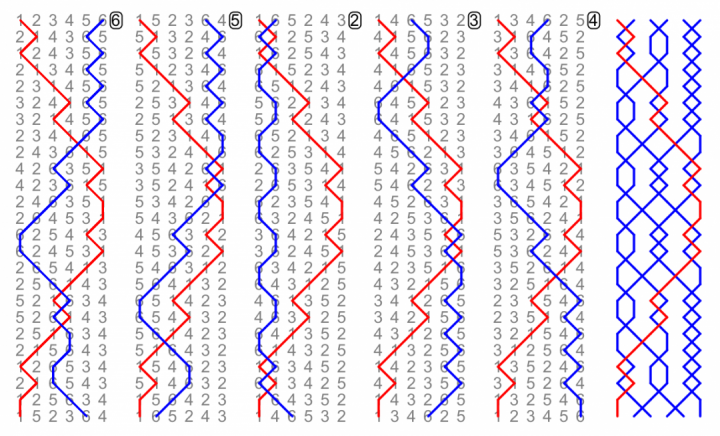 Woodbine is a 4ths place delight method, because it has 4ths when the treble moves between 2nds and 3rds, but no internal place when the treble moves between 4ths and 5ths. It's also an irregular method, meaning that it doesn't have the same lead heads as Plain Bob. Notice that 3 and 4, as well as 5 and 6, are consecutive in the place bell order. This means that 3-4 and 5-6 both ring the same position in the plain course.

Woodbine is an exercise in ringing by the structure, as determined by the position of the treble. The basic pattern is the same as Oxford, but the extra 4ths place pushes you into a different part of Oxford. The idea is to pay attention to the treble for a little bit longer after the lead end, and a little bit sooner before the next lead end, and otherwise just ring Oxford.

As an aside, the same idea can be used on higher numbers and I have rung one peal each of Woodbine Major and Woodbine Royal. There was a time when the name of Woodbine Royal was disputed, as a band named the method Sowerby in 1986 - this was possible because the rules for method extension at the time did not cover irregular methods. Roger waged a lengthy campaign about this with the Central Council Methods Committee, and although I don't exactly know what happened, the method is now officially called Woodbine at all stages and the name Sowerby no longer exists.

Back to the main point! This week we rang Woodbine successfully with Caroline. The next step is Norwich Surprise, which has the same work above the treble but a couple of differences below. That will be the focus of next week's session.