Mac users are a little bit behind Windows users when it comes to technology for online handbell ringing. We are catered for by Handbell Stadium, but we don't have a version of Graham John's Handbell Manager software that converts the input from motion controllers into keypresses that will drive Mabel or Ringing Room.

I have solved this problem by implementing my own simple version of Handbell Manager. It's not quite as fancy as Graham's, and in particular it doesn't have the option to draw graphs of the inputs from the controllers, but it works. You can download it here (do a control-click and select "Download linked file"). It's not really productised yet, because I haven't succeeded in packaging it up into a standalone application. But if you are willing to roll up your sleeves and do some software installation, here's how to do it.

To remind you, here is the first dummy handbell controller I made based on a large Arduino Leonardo. 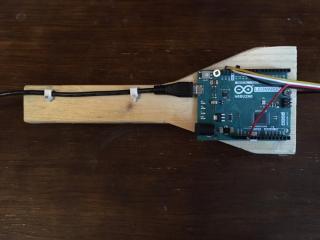 And here is one of Tim Hart's 3D-printed dummy handbells, with my small Leonardo Pro Micro inside. 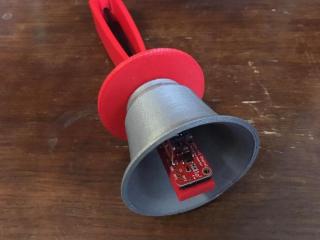 Tim and Graham John are planning to go into small-scale production with the 3D-printed bells and a new sensor board from ActionXL.

Online ringing with Ringing Room becomes more difficult when more people are involved, because there is more variation in the internet delays and more people who have to cope with it. Of course it's normal for ringing on more bells to be more difficult, but in Ringing Room, ringing on a given number of bells is easier when people are ringing two each (assuming that they are competent handbell ringers) than when they are ringing one each.

This has led to footnotes about first performances with one bell each, when they have already been achieved with two bells each - the reverse of the usual situation.

This is an updated article on how to make handbell controllers for use with Handbell Stadium or Handbell Manager. I now have more experience with using several different components, and I have been trying to make the software easier to use and install.

You might want to refer to the previous article for general information and pictures, but here I will try to reduce the instructions to their essentials.

The electronics (if you want to avoid soldering)

Components (for each controller)

The electronics (if you don't mind soldering)

Components (for each controller)

You need to fix the boards onto something that you can hold and swing like a handbell. If you are using a big Leonardo and an accelerometer with a Grove socket, then there are screw holes. With the Pro Micro and the non-socketed accelerometers, I use sticky-backed velcro (you can get it from Tesco).

Some ideas for making dummy handbells, in increasing order of sophistication:

Alternatively you can use a real handbell if you tie or remove the clapper.

This morning I rang in the first internet 10-bell peal.

Most of the ringing was very good, and we managed to build up a good rhythm. It was slower than we would have rung on real handbells, but that's inevitable with Handbell Stadium because delays are inserted to compensate for different internet lag at different ringers' locations. It took a lot of concentration and it was a satisfying performance. Most of the time I kept my eyes closed, because I wasn't finding it very helpful to look at the simulated bells on screen. The exception was when we had the occasional rough patch, when I looked at the screen to help me find my place, for example by waiting until everyone else had definitely rung if I knew I should be together at the back. It was actually my first peal this year, but I hope not the last.

In the afternoon we went to Angela's house and rang a quarter of Yorkshire in her garden, sitting in a long rectangular arrangement so that Tina and I were 2m away from Angela and Jonathan. It reminded me that real handbells really are better than online handbells. As I write this, it's pouring with rain, so we took advantage of the good weather just in time. 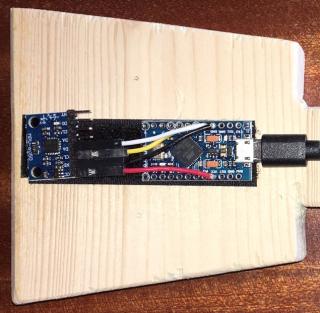 Among all this ringing I found time to finish some more motion controllers for use with Handbell Stadium. I used a smaller version of the Arduino Leonardo, called a Pro Micro, and a different accelerometer board based on an MPU6050. These components are cheaper as well as smaller, and the cost per bell was about £10. I made enough for Jonathan, Angela and Peter each to have a set so that we can all ring together in Handbell Stadium instead of using Ringing Room. Unfortunately two of the accelerometers don't seem to be working, so one of us will have to use the original ActionXL controllers until I can investigate the accelerometers further or replace them.

Graham John has now set up a website for Handbell Stadium, which includes pictures of various motion controllers and housings for the ActionXL controllers. Among these are some beautiful 3D-printed dummy bells made by Tim Hart, with a Leonardo Pro Micro and an accelerometer neatly fitted in.