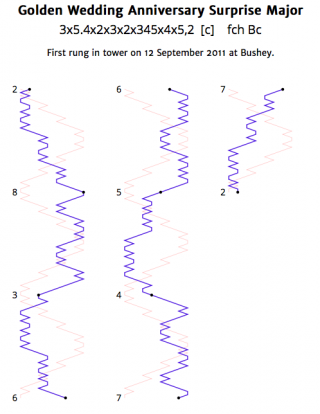 We rang Golden Wedding Anniversary, with just a short false start before succeeding. We all concentrated and rang carefully, and in general the ringing was good. I found that the key to ringing both parts of the frontwork (e.g. 2nd and 3rd place bells) is to concentrate on one bell and fit the other bell around it. When ringing 3rd and 5th place bells, a dodge with one bell always matches a place with the other bell, so again it's possible to focus on one of them and make the other one fit in. Tina and Jonathan reported that making simultaneous internal places (4th and 5th, or 3rd and 5th) was a little awkward.

Jonathan's sister Lizzie has just had a baby boy, named Frederick, and it turns out that there is a suitable method for us to ring next week in his honour. It's based on Pudsey, with a different first section (when the treble is in 1-2). The dodges at the back are moved slightly, resulting in a triple dodge across the lead end. 6th and 8th place bells swap during the first section, which means that they do their 3-4 places in the wrong direction with respect to Pudsey. Finally, there are double Kent places across the lead end in both 3-4 and 5-6. We hope it won't be too difficult. 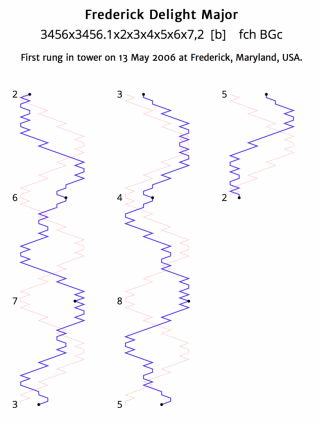