It has been on my list to write a blog post or two about handbell ringing in Kalamazoo, although I never imagined it would be about this.  Mark Rizzo, who died just last month at the age of 50, features on the list of names associated with my earliest ringing experiences, one of the rather awe-inspiring (certainly to me) group of existing handbell ringers who were doing pretty clever things out in a small College in the Midwest.

Other people can speak of his tower bell ringing, his support of ringing in Chicago and of the Society of Cumberland Youths, not to mention the many other activities to which he lent his energy and enthusiasm.  Me, I'm going to always remember Mark as a handbell ringer.  If one looks at his rather too short ringing career, his period of very active handbell might seem only a small part of it.  It doesn't matter.  Once a handbell ringer, always a handbell ringer, and I think he would have agreed.

Mark was a member of a very small group of bellringers who rang his first peal in hand, and a member of an even smaller group of bellringers who rang everything by place notation.  He made the required Pilgrimage of all Kalamazoo handbell ringers of that era:  the trip to the office of Roger Bailey at Imperial College, and the resulting handbell peal for the Mid Atlantic Society.

His total of 16 handbell peals, 4 conducted, may be modest by some standards, but at that place and at that time, the quarter peal was the true medium in which we made progress.  Peal or quarter, these were mostly student bands, and usually had at least one person (like me) for whom either the method or the length was a stretch (or both), and actual conducting had to happen.  It was no good just putting in the bobs and hoping for the best - that was a guaranteed loss.  It was years before I appreciated how hard the likes of me made it for the likes of Mark, and how easy they all made it look.   All things considered, we didn't lose all that many attempts. 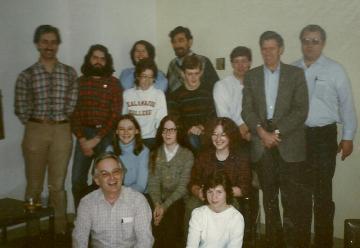 The photo on the left was sent to me by Jeff Smith, who taught Mark, myself and many other Kalamazoo students to ring.  It is a slice of North American handbell ringing from 1984. Mark Rizzo is standing at the back, third from the right. I had been ringing maybe six months at that point, and this was the first time I had met any other ringers outside of Kalamazoo.   I rang a quarter of Plain Bob Major (the first of many of my quarters which Mark conducted), and listened in awe to discussions which featured things like 'Norbury' and 'Yaxley'.  Oddly enough, this photo is a reasonable snapshot of the people Mark rang a lot of handbells with, although some of the top contenders are missing - his good friends and fellow Kalamazoo graduates Tom and Chris Farthing, and of course, Jeff Smith himself.

Mark certainly did his 'Kent Apprenticeship': Plain Bob, Kent and Oxford feature high in his list of methods.   Many of these were first quarters for somebody else.  In fact, he rang a lot of quarter peals, and relatively few were to advance his own ringing.  He was keen, he was always willing to help, he took his opportunities where he found them and made the most of them.  Along the way, he made a difference.  Tom Farthing wrote that Mark was "a good ringer and a good guy".  He was.

News of Mark's death was still fresh when we had our most recent Handbell Day, and there we had a small world moment with Nick Jones, who knew Mark from having worked in Chicago for a year.  So it was satisfying and appropriate that we were able to dedicate this quarter to Mark:

Tina: I liked the article about Mark. Mark's sister forwarded your site's link to me. She got in contact with Rob Kakuk (Kit Almy's husband) and email made its way to me. We were able to ring handbells at Mark's memorial reception last week. I just got back from the Kalamazoo ringing weekend. About 25 of Mark's family members came to the tower yesterday to learn a bit what Mark spent so much time on and listen as we rang a quarter dedicated to Mark. It was nice for the ringers to share the part of Mark they knew with the family. The family seemed to appreciate the connection. I wrote up a obituary about Mark for the Clapper. I can email a copy to you if you like. I heard you will be in Kalamazoo for homecoming next week. I plan to be there Friday evening and until 9am on Saturday. It would be nice to see you. Let me know if there might be a time to get together.
Thank you so much for sharing this blog about my son, Mark. He was a wonderful human being and will be missed. However, I never knew the extent to which he was connected to ringers and ringing. Ringing a quarter peal in his memory is very much appreciated. It means a lot. He will be missed. His Mom