We did not manage quite the amount of handbell ringing we had anticipated over the holiday period - the usual suspects, 'flu and family events, conspiring against us. 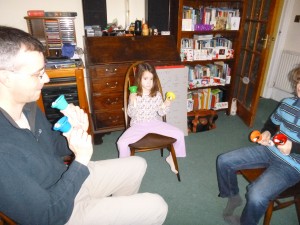 However, Simon completed a project we had been talking about for quite a while, and the quiet period between Christmas and New Year was perfect to finish this off.

This was the conversion of a set of 8 Kidsplay handbells to proper clappering, so that they could be rung for change ringing.  Simon will be writing a detailed post showing how he did it, using plans from Richard Johnston, but I thought I would share the inaugural ringing this morning.

The bells handle very easily for small children, and the clappering action reduces the sharpness and loudness of the tone quite considerably.  In fact, compared to 'real' handbells, they now sound a little dead.  However, in a small classroom and competing with several other sets of bells (which we usually muffle in some way), this is quite a desirable quality.

However, listen for yourself:

Following on from this article, I've been thinking.... Are we paying over the odds for handbells from the bell foundries? Is the cost preventing would-be handbell bands from buying their own set? Is there a cheaper alternative? Worth investigating!
If the foundries could produce a handbell with a pressed metal bell but normal clappers and handles, I wonder what the cost would be.