I've always liked Chesterfield, and I think it's a good candidate for including in the Surprise Major repertoire as an introduction to wrong-place methods. I encountered it as part of Crosland's spliced series. Actually it occurs in two series by Richard Crosland: a series from 4 to 12 methods, which I rang on handbells in the Imperial College days, and as the C in the alphabet spliced series, which I've rung on tower bells but has perhaps never been rung on handbells.

The wrong-place section consists of wrong hunting on the front 4, and combined with the x14x section when the treble is in 5-6, it produces a four-bell frontwork a little like that of Bristol. The points occur one blow further away from the half lead, which means they are on the opposite stroke from the points in Bristol. Nevertheless, the fact that four bells are doing points simultaneously is a good anchor, and when one's bells are both on the front, they are either coursing or in the opposites position on the front four, which are equally easy.

The in-course (without singles) falseness is B, the same as Yorkshire, so it should be possible to obtain handbell-friendly compositions by rearranging compositions of Yorkshire for the reversed place bell order, if there are no bobs Before. The Wrong calling position comes before the Middle. For example, the "delightfully easy" composition of Yorkshire by Bernard Taylor can be arranged by starting half way through and exchanging Wrongs and Middles, then moving the block of three Homes so that it's still at the end. Here is the result, which still has 12 courses of coursing for 3-4 and 5-6.

I haven't considered the musical possibilities of Chesterfield, but that's not usually my priority for handbell compositions. For a quarter peal composition, after a bit of searching I haven't come up with anything simple that's better than wrong home wrong, so I would stick to that.

For reference, here are the lines for each handbell pair. 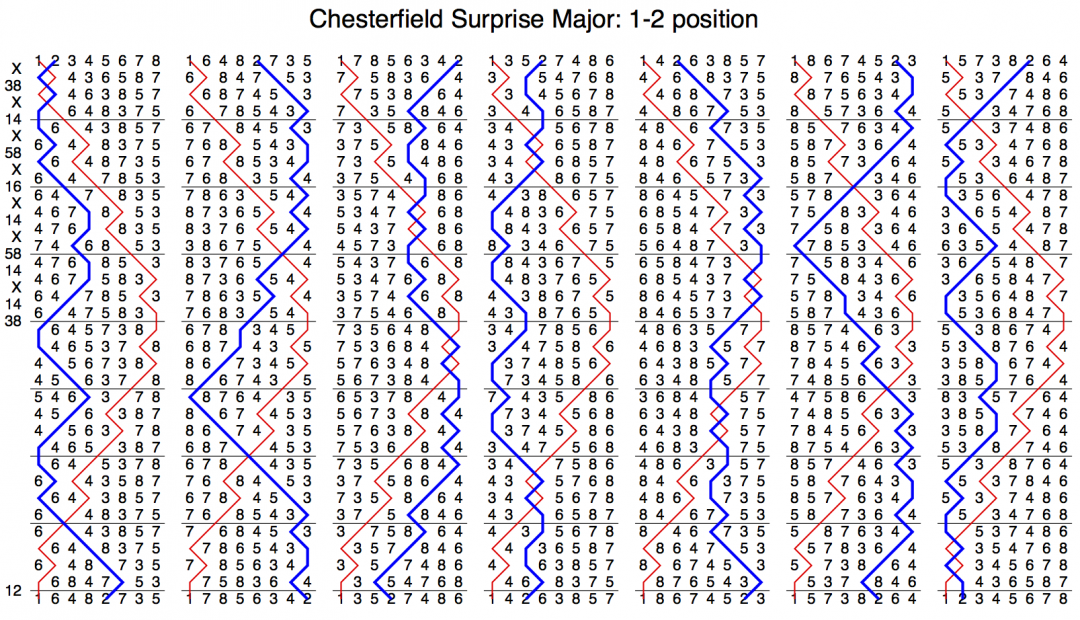 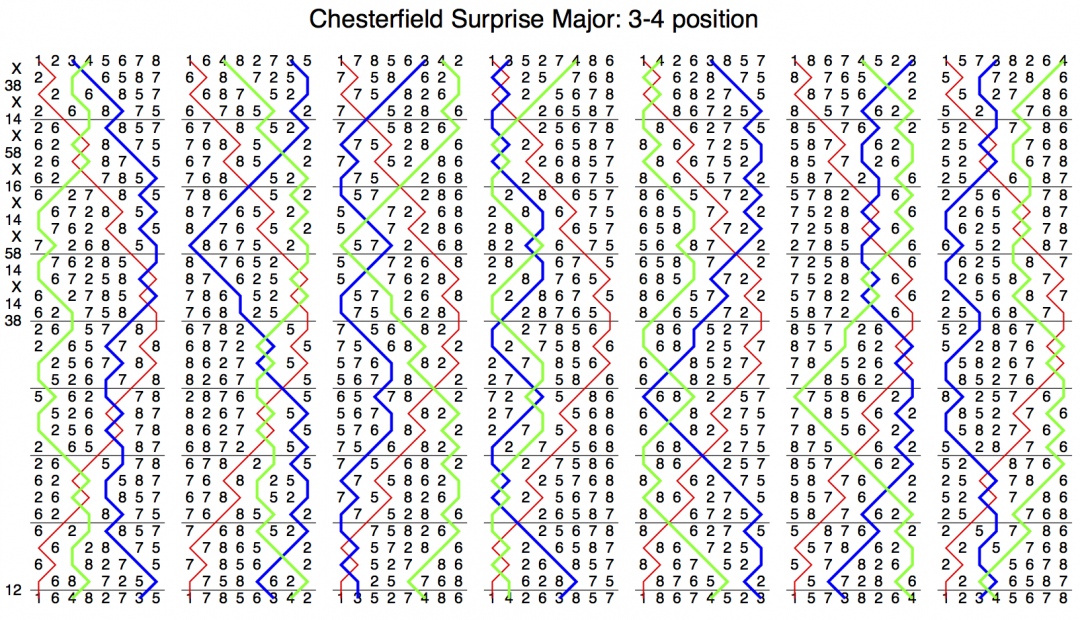 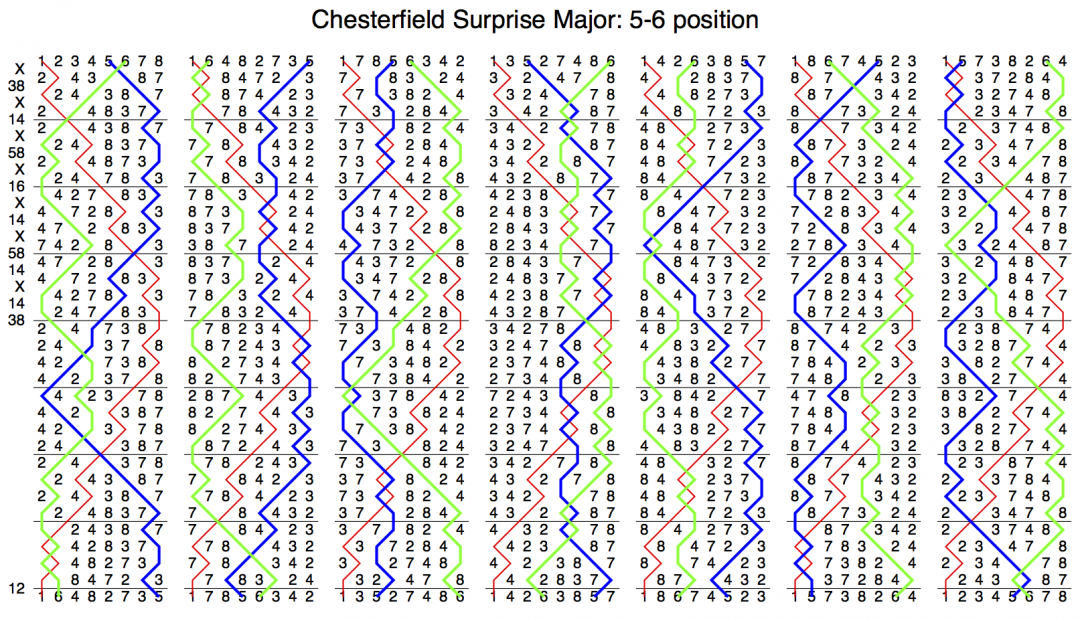 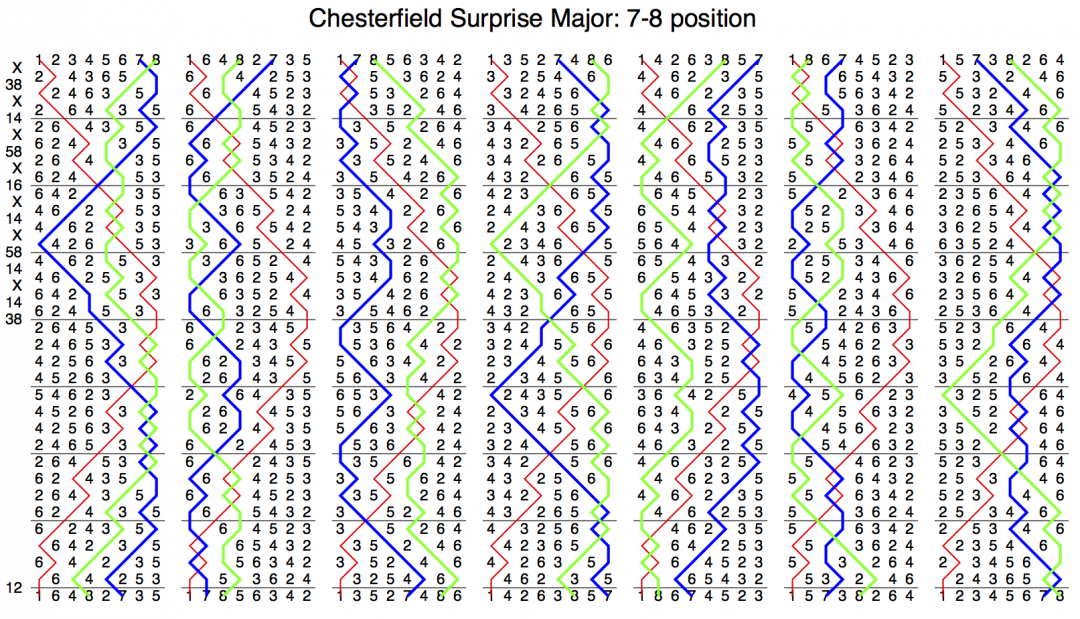