Last Friday, two Ringing Worlds arrived at once, catching up from the snow. So there were two instalments of Simon Linford's selection of methods for a new Surprise Major repertoire.

First was Yorkshire. We have written so much already about Yorkshire on handbells that I don't have anything to add at the moment. It's reassuring that it's made the cut for Simon's selection, because otherwise we would have a divergence between preferred methods for tower bells and handbells.

The next article considered Cornwall, and included it with great enthusiasm. I agree with the choice, and I recently used Cornwall as the basis for a Surprise Royal method-learning workshop on tower bells.

We've rung Cornwall on its own in the past, and it's part of Norman Smith's 23-spliced. Also it's part of the Nottingham 8, which we are planning to ring on handbells in April. So ringing some Cornwall now would be good practice.

There are several features that make Cornwall a good progression from Cambridge and Yorkshire.

Simon Linford also noted that Cornwall can be used to introduce 6ths place bobs. That point might not have occurred to me, because I like ringing spliced and all the peals of spliced I have ever rung use 4ths place bobs throughout, in both 2nds place and 8ths place methods. (There are exceptions, such as John Leary's 23-spliced, but I haven't rung that one). However, Simon gave the "simplest possible quarter peal composition", which is 6 calls affecting 2,3,4. For Cornwall with 6ths place bobs, that's 6 calls at Out (bob, bob, single, bob, bob, single). Quoting its musical properties from Simon's article: "Contains all 24 each 5678s and 6578s, 12 each 5678s and 8765s off the front, 8 7468s and no 82s or 83s".

For handbell ringing I usually pick compositions for simplicity of calling and good amounts of coursing for each pair. When we rang a quarter of Cornwall, a long time ago, the composition (4ths place bobs) was 5 befores, 3 homes, which is 1280. Starting with 1 or 2 homes gives more coursing for 3-4.

We're ringing a quarter of London this evening, but maybe next time we should ring Cornwall, and perhaps try the 6 courses with 6ths place bobs.

For reference, here are diagrams (from Martin Bright's Method Printer) for each handbell position in a course of Cornwall. 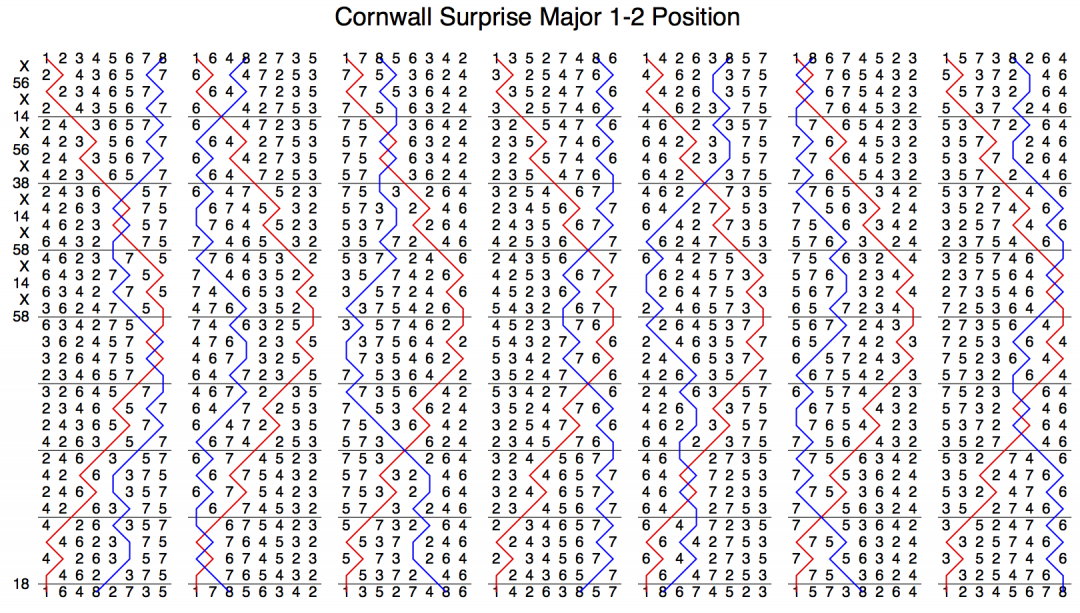 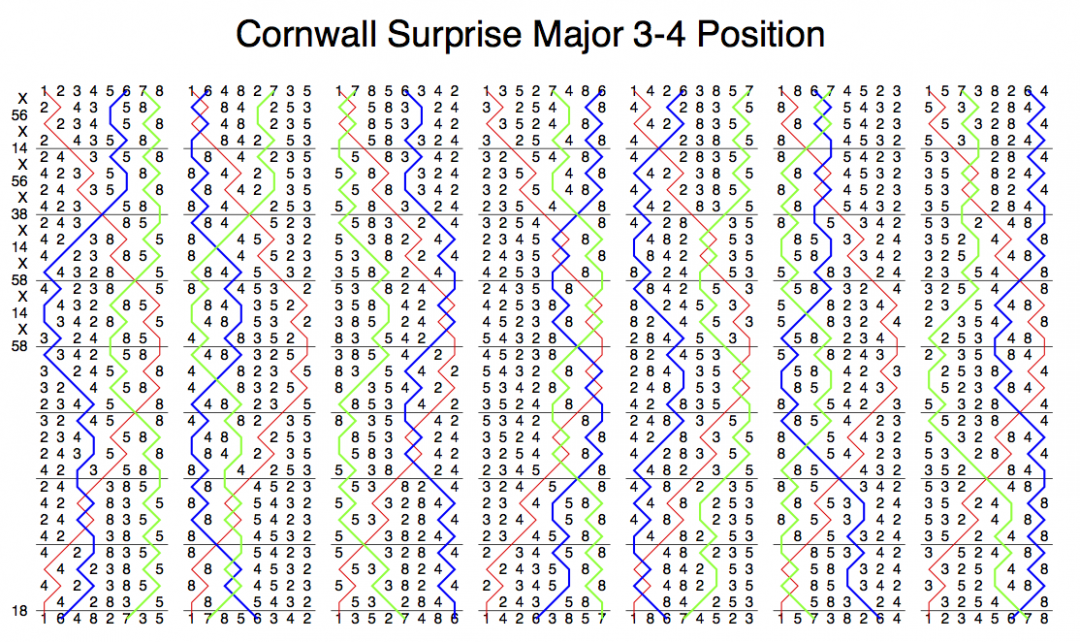 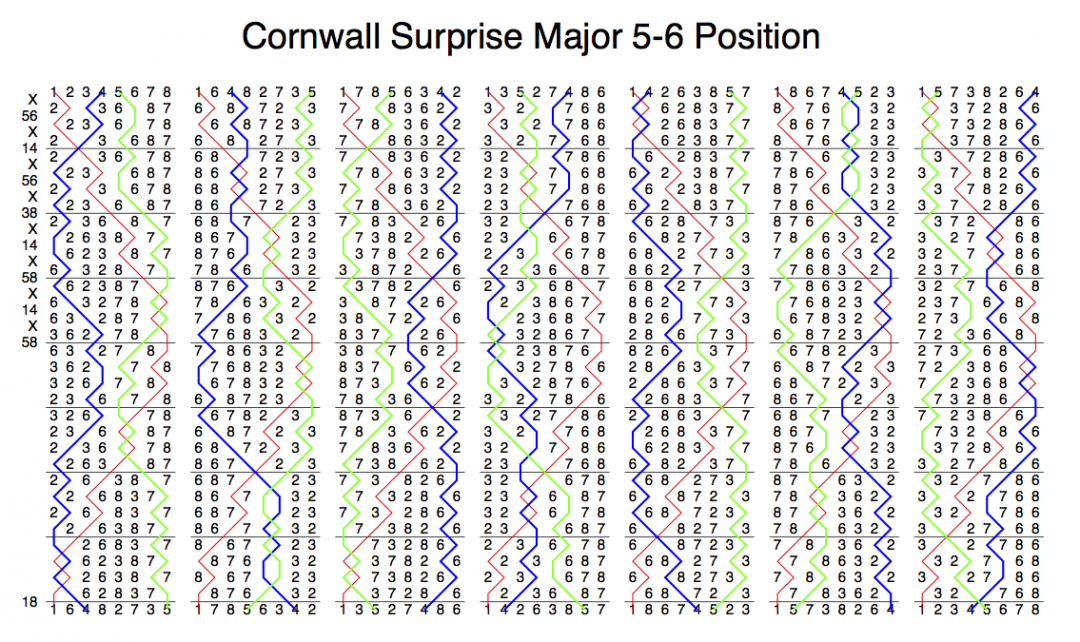 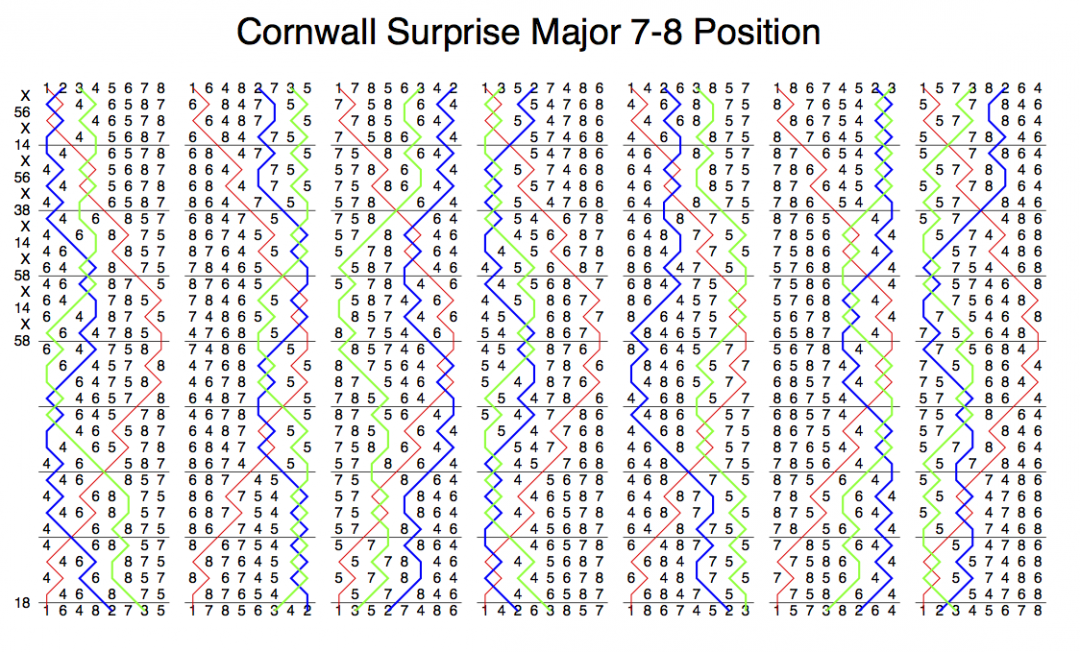