I have commented before that one of my ringing ambitions is to be able to ring on handbells everything that I can ring on tower bells. Earlier this year I made this ambition much more difficult by ringing a peal (on tower bells) of cyclic spliced maximus. It included Ariel, Phobos and Zanussi, which are among the currently popular surprise maximus repertoire. If you look at the lines for these methods, they might not seem very easy, but the grids show a clear frontwork/backwork structure with a lot of regularity. The diagrams come from Martin Bright's method printer at boojum.org.uk.

It seems to me that the ideal way to ring these methods is to ring the frontwork and backwork by their structure - plain hunting, reverse hunting, treble bob hunting, points, fishtails - and learn the irregularities at the frontwork/backwork interface according to the position of the treble. This seems rather difficult, but there are simpler methods that have similar structural features. One such is Kenninghall, which exists at all stages from major upwards. Here is the grid for Kenninghall Maximus.

The backwork is Cornwall: treble bob hunting with a triple dodge (or far dodge near, in 5-6) at the beginning and end of the lead. The frontwork is wrong hunting on four. The "twiddly interface" is much simpler than in the methods above: just a fishtail on the front, and 3rd and 4th place made immediately below the treble.

Ringing this kind of thing on 12 is still a little beyond us, but we could start with major. Here is how the line works out, with a diagram from Don Morrison's web site at www.ringing.org. 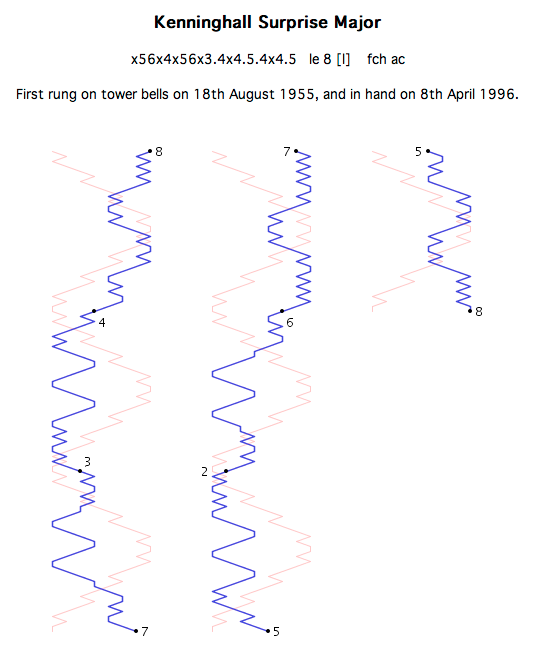 What do I mean by ringing this method structurally? In the frontwork, the idea would be to ring without thinking about how many times I have been to 4th place and back. In the backwork, the idea would be to treble bob hunt until the treble reaches 3-4 down, and then do a triple dodge. Identifying when to make 3rd place or 4th place below the treble should be done by following the position of the treble. In practice this would be supplemented by thinking about which place bell to become. For major I think it's a little artificial to avoid counting the hunting cycles, but for royal and maximus it would be much better not to count. Anyway, clearly the key skill is wrong hunting on the front with one bell while treble bob hunting on the back with the other bell, which also comes up in London No. 3 Royal and its extension Newgate Maximus.

I've been trying this with Abel, and it's a little tricky. The wrong hunting / treble bob hunting is fine, but noticing when the treble arrives takes concentration.

After Kenninghall, a slightly harder method in a similar style is Selborne. Here is the line for royal. It has a 2nd place lead end; a direct comparison with Kenninghall would be the version with a 10th place lead end, which is called Yiewsley on 8 but hasn't been named on 10. 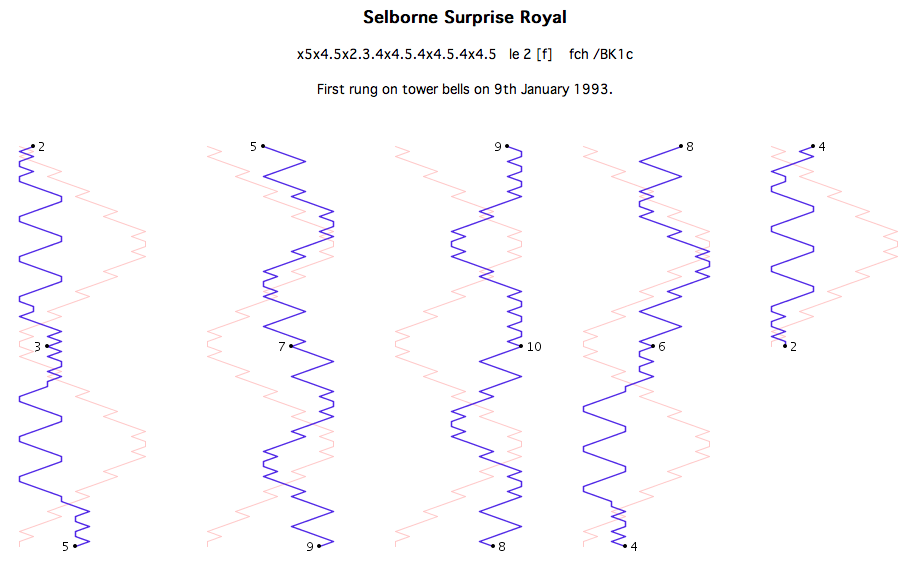