The Cam and Granta Variations of Treble Bob

The Cam and Granta variations of Treble Bob consist of Kent, with leads of Kent Little Bob or Bastow Little Bob when the back bells should be in the slow. What does this mean, and why is it interesting? We will see that it provides an easier way into ringing Kent on handbells, especially on higher numbers.

First we need to explain Kent Little Bob and Bastow Little Bob. In both methods, the treble plain hunts to 2nds place; that is to say, it alternately makes 2nds and leads. In Bastow, the other bells treble bob hunt except that they don't dodge in 1-2. Kent Little Bob is the same except that Kent places are made in 3-4. Here are the lines for Major, taken from www.ringing.org. They are both good methods for getting started with Royal and Maximus. 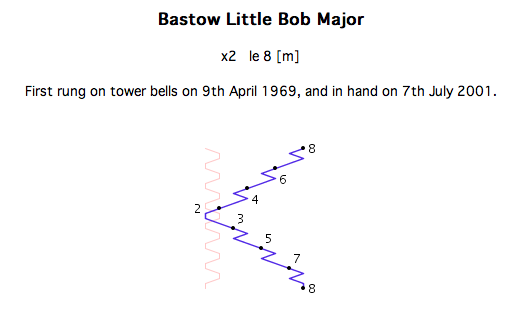 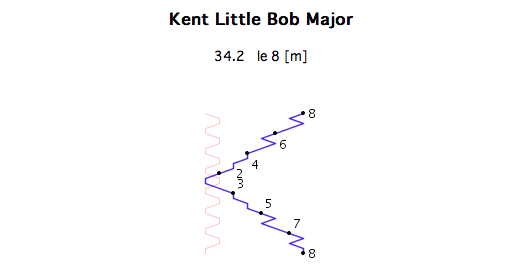 A course of Cam Variation consists of 3 leads of Kent, until the tenor is 2nds place bell, then 2 leads of Kent Little Bob, while the tenor and the 7th ring 2nds place bell, then 2 leads of Kent until the tenor is 8ths place bell. One way of thinking about this is that the treble goes into the slow instead of the tenors. This makes it possible to ring something that is essentially Kent, with a ringer on 7-8 who is confident treble bob hunting in the coursing position but not so confident ringing the slow work. If the ringer of 1-2 is able to pay attention to which bells are coming onto the front, then there is no need to call the changes of method. Everyone else, including 7-8, rings by the normal rule of making 3-4 places if the treble is below them when they are in 3-4. The ringer of 7-8 knows that the tenors won't go into the slow, and everyone else hardly notices, except that the course is shorter than usual.

Granta is the same idea, but with Bastow instead of Kent Little Bob. I haven't rung it, but I think it would be a little trickier because the rule for dodging or places in 3-4 isn't the same as in Kent.

In either case, the same idea can be used for Royal and Maximus, keeping all the bells from 7 upwards out of the slow.

The original motivation for these variations seems to have been musicality rather than handbell-friendliness. The report of the Central Council meeting of 1921 states:

Mr. Willson asked if the [legitimate methods] committee were a tribunal to decide what a legitimate method was or what a variation of a method was? He did not see how some of these quack variations called Treble Bob could be Treble Bob when the treble was pulled all over the place. Let them call it James’s Mixture if they liked (laughter), but he objected to calling it Treble Bob. ‘The Glossary’ said Treble Bob was the name given to methods with a peculiar path of the treble. In one variation he saw the other week the treble was in the slow, and he objected to any man, whether he was Tom, Dick, Harry or James (laughter), having the right to distort any method and claim the original name for it.

and later in the same report:

The Rev. H. Law James said he had rung a peal of Major and a peal of Royal in the Granta variation, and, while he had made up his mind he was not going to ring another peal of Treble Bob, because of the row in the middle of the course, he was quite willing to ring as many peals of Granta as he could get the chance of ringing. They had music from beginning to end, and, after all, that was what they had to consider.

My interpretation is that the "row" (noise) in the middle of the course refers to the leads in which one of the back bells is in the slow and therefore the treble appears in its place in the roll-ups and in the coursing music. The "legitimate methods committee", of course, is now just called the "methods committee". Another benefit of Cam and Grant Major is that they don't have the falseness of Kent, making it easier to find compositions.

Another extract from the same report, although a diversion from the current blog article, is interesting for its Platonist view of methods and compositions:

Mr. J. A. Trollope, referring to new methods, said there was really no such thing as a new method. They had all been worked out, and nobody had the slightest chance of getting anything that had not been got before. Moreover, there was no such thing as ownership of methods, but if a band wanted to ring a method - it was open to anybody to work out a method independently, although it would not be new - that band was entitled, provided the method had not been previously rung, to call it what they liked, and nobody had a right to challenge it. The only exception to that was, he thought, in the case of the old methods which had been in the standard ringing books. If anybody wished, for instance, to ring a peal of ‘New Bob Major,’ of which a peal had not been rung, they were not entitled to call it by any other name. There was no such thing as making a new method, and no such thing as ownership of a method.

Mr. T. Faulkner: What about Stedman?

Mr. Trollope said Stedman did not lay claim to the method. He simply gave the result of his investigations - what he had done and what other people had done. The man who composed a song put something into it himself and to some extent, therefore, he was its creator, but the man who composed a peal was not the creator at all, he was simply the discoverer of the result of certain laws.

Now for some compositions. I haven't analysed their musical qualities; I have just selected them from among many similar possibilities produced by my computer, on the basis of how they look and how easy they might be to learn. They are all true to the Granta variation too. I won't claim authorship, because after all they are simply the result of certain laws...

You mentioned J. Armiger Trollope's 'Platonist' view of methods and compositions. In case anyone has not come across it before, the ideas were explained in 'Variation and Transposition', JAT's book on the subject 'Issued under the Authority of the Council'. Roger Bailey published the text of the book on-line, see http://www.ringing.info/v-and-t.html