The first all-women handbell peal for the Scottish Association

Tina, Angela, Barbara and Susannah have been working on this project for a little while, and yesterday they succeeded with a peal of Yorkshire which was also Tina's first handbell peal as conductor and Angela's first of surprise on an inside pair. 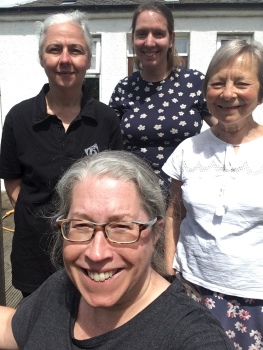 At the time of writing this is the Featured Performance on BellBoard, having the greatest number of "likes".

Tina wondered whether it was the first all-women peal of surprise on handbells. That's not a very easy question to answer, but Linda Garton's video lecture about women's peals refers to a peal of Rutland in 1983. There is also this one from 2019 by Katie Town, Jennie Town, Emma Southerington and Kath Firman. Probably not many overall though.