A week after the previous attempts, we got together again and succeeded.

Perhaps propelled by the conglomeration of footnotes, the peal quickly went to the most-liked position on BellBoard - hurray!

One of the congratulatory comments on Tina's Facebook asked the inevitable "What's next?" Well, it's back to Horton's Four; we haven't rung the split tenors section yet, but I hope that our 23-spliced adventures have made me better at non-coursing positions. Probably we will try to ring a really good quarter of each method individually before we go back to practising spliced. Also we're going for 8-spliced royal in the tower in December, so we might need a break for method and composition revision for that.

But the immediate "what's next" is that we're not ringing handbells again this week; instead, Jonathan and Angela suggested going out for dinner to the children's choice of restaurant, to reward them for all their patience during our many attempts. You might think this would mean resigning ourselves to somewhere like McDonald's, but no - they have chosen a proper Italian restaurant that we went to last year for a friend's 50th birthday. So that should be a nice evening out for all of us. 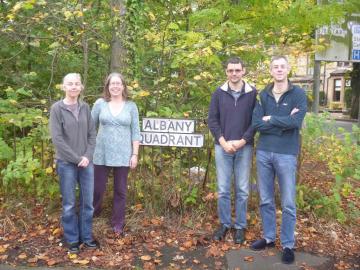