We've started a Stedman Triples project with Marcus and Julia. Tina, Julia and I all like Stedman, but there's never much enthusiasm from the rest of the Albany Quadrant regulars, so when Marcus mentioned that he had been trying Stedman with the Five O'Clock Club and would like to do more, we jumped on the opportunity.

The idea is to start in Ringing Room, practise and ring a few quarters, and then get together in person for a peal attempt when we feel confident enough. So far we have met three times and although we haven't scored a quarter yet, we are getting noticeably better each time.

My history with Stedman on handbells goes back to my student days when there was a tradition for a band of students to ring a touch of Stedman Cinques at the Cambridge University Guild annual dinner. We think the tradition started in the 1960s when there was a resident band regularly ringing peals of Stedman Caters and Cinques, but in my day we had to spend weeks and months practising the particular touch. This was the "Z course", a touch of 120 with the calling 1, 12, 14, 15, 16, 17, 18, 19. Why Z? Well, the Ringing World Diary used to have a list of turning courses of Stedman Cinques that could be combined into various touches, and the calling 12, 14, 15, 16, 17, 18, 19 was denoted Z, so what we rang was a bob at 1 followed by Z. I've just looked in this year's diary and although it doesn't have the old list of turning courses any more, this particular touch of 120 is still there and labelled "Z course". Anyway, every year we practised hard, and there were quite a few Guild members whose handbell repertoire consisted of Plain Bob Minor and the Z course of Stedman Cinques.

Since then I've rung a few peals of Stedman Caters and Cinques, always with an expert conductor such as Philip Saddleton, David Brown or Matthew Durham. I've also rung one peal of Stedman Triples, with David Pipe calling Andrew Johnson's bobs-only 10-part.

My approach to Stedman on handbells has been based on ringing the blue line, trying to keep track of which way each bell would go in (using the tip that you go in the same way as a bell you dodge with went out), and taking great care when both bells are on the front together. Sometimes I have to pick up the nature of the six by watching or listening to the leading. This approach gets easier the more bells you're ringing, and it's a bit intense for triples where you spend relatively more time on the front and are more likely to have both bells working together on the front. I have always thought I should develop the ability to keep the nature of the sixes ticking away in my mind, and generally ring in a more systematic way. The current Stedman Triples project is a chance to do that.

Another point about the current project is that none of us are experienced Stedman conductors. On tower bells I've called a couple of peals of caters and occasional quarters of triples, but very much in a bob-calling style with little chance of correcting any mistakes. So we are all going to have to learn more about how the method fits together and how the compositions work. The initial idea was for Julia to call a quarter, but the first time we met she was recovering from covid and didn't feel up to it, so Tina is our conductor for the moment. When we've scored our first quarter (soon, I hope), I expect we will all have a go at calling subsequent quarters.

I will write about compositions in a moment, but first let me comment on ringing the method. I am getting much better at keeping track of the quick and slow sixes, although I still occasionally have to remind myself by looking at the leading. Also I am ringing much more by just ringing each six as it comes. One thing to remember is that in a slow six, the bells in 1st and 2nd places cross then cross back. Just thinking of a slow six as wrong hunting on the front three doesn't quite work because you have to take into account the place notation 7 at the beginning of the six, which is one blow of right hunting. Another thing that sometimes catches me out is that the bell in 3rd place always goes up to 4-5. Occasionally I try to involve it in the frontwork of the next six. 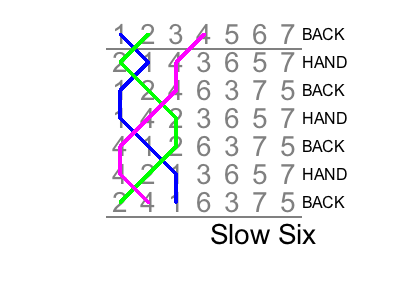 Now, what about compositions? Arguably the very simplest quarter peal compositions are along these lines:

The 7th is the observation bell. Calling position 3 is in slow, and 8 is out slow. There are various similar possibilities, some arranged as three-parts, some using different calling positions (e.g. 7 and 12). Probably they give the minimum number of calls for a quarter, or close to it.

However, because we want to ring a peal eventually, it's more important to pick a quarter that leads to an easy peal composition. So we are ringing a Thurstans block, which goes like this.

This is a twin-bob composition, meaning that bobs always come in pairs at two consecutive sixes. The 7th is the observation bell. The positions S, H, L, Q are as follows. S is in slow and first whole turn. H is both half turns. L is last whole turn and out slow. Q is in and out quick. Remembering that the figures on the right are six ends, working out the row two changes earlier gives the starting row of 1234567 (of course!) and the row at the first part end is 2345167 so that bells 1 to 5 are cycling round.

Usually when discussing twin-bob compositions, an argument in their favour is that every bell always goes in alternately quick and slow, because if affected at the back there is always an even number of bobs (note that S followed by H gives four bobs consecutively). But if we manage to keep track of the nature of the sixes while ringing, there is never any need to remember which way a particular bell will go in next, so this advantage of twin-bob compositions becomes irrelevant. What is relevant is that there are easy peal compositions that join together four copies of this quarter peal composition with different starting rows. I will save that for another article.