The News from Nutwood 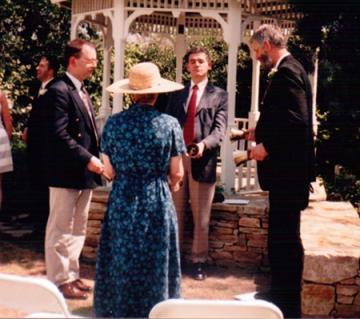 The Bear has left us.  That prolific, amusing, travelled, entertaining, exasperating and sometimes grumpy one more often known as Roger Bailey has left us.  For us, it is an enormously personal loss, as it will be with so many other handbell ringers.

For Roger rang with just about everybody, and so each of us has our own memories and anecdotes, which are never the same as anyone else's.  These are mine.

I was not a graduate of the 'Imperial College Handbell School', the lunchtime sessions from which he taught over 50 ringers, including several who had had no previous ringing experience in the tower.  These sessions, paired with regular evening peal attempts, accelerated the progress of many other handbell ringers (see Simon's own tribute to Roger).  Instead I was one of the several Kalamazoo College handbell ringers who did the pilgrimage to Roger's office for a masterclass in handbell ringing, followed by a further 7 peals spread out over a number of years.

As is often the case, the peal ringing only tells part of the story.  I also got to know Roger through tower bell ringing, through being on the Central Council of Church Bell Ringers together, through The Ringing World, and through a shared love of a good gossip.  His chattiness and natural curiosity about people in general made him the ideal choice to babysit my seven aunts (who could be overwhelming en masse) during our wedding.  They thought he was 'absolutely charming' and 'just wuuunderful'.

More latterly he was a reasonably frequent visitor to 1 Albany Quadrant, giving us a helping hand in 'getting people some peals', not all of which were successful.  There was one memorable afternoon with Roger, myself and Robin Churchill, when we absolultely could not get anything round.  Robin and Roger hadn't seen each other for years, and the breaks between ringing grew longer and longer as anecdotes and stories from the old days were dusted off and shown the light of day.  Quite a few ears must have been burning then.

Roger in grumpy mode was less fun, but still often a good fund of stories after the event.  I remember one walking holiday where he stalked off holding the map, leaving the rest of us to an exhilerating off-piste exploration.  He had stuck to the path and missed all the fun.  Another time, Simon recalls wandering down the streets of Paris in the company of a grumpy Roger, who got even grumpier when a pidgeon pooped on him.  He got no sympathy.

(Once Roger pointed out to me that 'my young man' had quite a talent for being grumpy, which was all the more effective as he generally kept it well hidden.  I am pretty sure it was a compliment.)

The Editor of The Ringing World has already made reference (albeit obliquely) to his status as 'resident awkward bugger' at the Central Council of Church Bell Ringers and I was often never more entertained than when Roger was really annoying somebody (and it was especially entertaining when Roger turned out to be correct).

He was outwardly sardonic and this hid a very generous and painstaking nature.  When he brokered the purchase of a set of handbells for us, he also went to considerable trouble to locate some old-fashioned bankers cloth coin bags (which banks no longer use) in order to wrap the bells up.  He found and presented a farthing to Tom Farthing when he visited from Kalamazoo.  Despite his often pointed criticism of ringing associations, he was very loyal to those same organisations, and gave them tremendous support.

It was this attention to detail and stubbornness in following through with it that informed his approach to handbell ringing.  He was not one to give up, and not one to let you give up either.  The end result was ringing that you may not have thought you could do.   He often explained that his conducting style was to just say everything that occured to him in the hopes that something would be useful.  A nervous ringer was eased along by a stream of low voiced muttering.  When something just completely imploded, he would sometimes hold his head and giggle helplessly.

And then, there was the entertaining visits abroad to ring peals in new countries.  When we had a spell in Lisbon, Roger turned up with a pregnant Julia Cater and very young Bethany Cater Clarke in tow.  Julia and I took turns looking after all the various children and ringing handbells.  Tales from other journeys were filled with similar mad stories - the kind of madness that we need to stay sane.

The scene I want to leave you with, though, is this:  Roger visited us a second time in Lisbon, in company with his wife Susie.  We rang a handbell peal in the back room of our holiday flat at the Escadinhas do Marques de Ponte de Lima (possibly the longest address for a peal location?).   The ringing was very good, and therefore was unaccompanied by the usual Baileyesque monologue, just the handbells twinkling through one extent of Cambridge after the other.  Through the open door to the balcony came noises of people cooking suppers, dogs barking, a piano lesson and the bells ringing at the churches in the neighbourhood - completely out of sync or tune with our own set.  It should have been distracting, and another time it might have been terminally so.  That evening, though, the changes tumbled through, uninterrupted, steady, flowing out and mingling with the other noises of life beyond.  Farewell, old friend.

My first encounter with Roger was in my first week as a fresher after arriving at my first Hart Street practice. Following my introduction there came the response, "Oh no, not another Diserens". As an unconfident youngster, this was just the sort of welcome I didn't need. Throughout my years in London I avoided him, helped by the rift between him and the UL leadership in the early eighties. My next serious encounter was in a peal attempt at Willesden. Marcus Wheel had organised attempts of Spliced Major, with a view to ringing Smith's 23. The method ringing and Marcus's conducting were fine, Alison Surry was setting an excellent beat on the tenor, but Roger had decided we should have enormous handstroke leads and was ruining the ringing - I was getting more and more irritated. After an hour or so, Roger called out, "If we rang with decent handstroke leads, we might get some good ringing!". I was ringing next to him, and suggested he leave the conducting to the conductor. He replied that if I didn't like it, I could set my bell. This was the final straw for me, and I did. There was hideous embarassment all round... Two years ago, Roger came over to Germany to visit Mike Trimm and I drove up to Bonn to ring a handbell peal with them. Sitting chatting with Roger, I realised what an many-facetted guy he was, and how we had many interests in common, from cats to hill-walking. This was further reinforced when he travelled out to Dordrecht to help our little European band ring Smith's-23. Life can be full of regrets, and one of mine is being put off by first impressions, and not realising what a generous and fascinating person Roger was, and taking time to get to know him better.